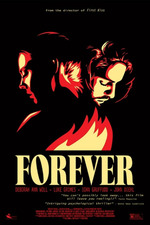 Getting back to my ever-growing watchlist, I decided to watch the 2015 obscure as hell indie film Forever. And what did I think?

Not a bad movie but I expected so much more.

To the films credit nobody in the cast in bad. Deborah Ann Woll (Daredevil, True Blood) is the best in the film as Alice, a journalist who finds herself joining a commune after the suicide of her boyfriend. Woll’s performance is subtle and gentle throughout the film as her character is the quiet type but she makes it work and you feel sympathy for her character. Luke Grimes (True Blood, The Magnificent Seven) plays Charlie, another commune member who falls in love with Alice. Grimes does a good job in the film as his character is initially hostile towards her (leading to a rather sudden, need for intimacy sexual tryst) but gradually warms up to her and opens up about his past, with the two of them eventually leaving the commune. The two have good chemistry with each other and the best scene in the film is a quiet extended moment with them In a garage. Unfortunately everyone else in the film, while good, disappear into the background after Alice’s arrival save for John Diehl as commune leader Neil even if he’s saddled with some cliched, faux deep indie monologues.

In the technical categories, things get a bit more divisive.

Tatia Pilieva does an average job directing the movie. Outside of the sequence where Alice discovers her boyfriend has committed suicide, her direction feels like it doesn’t have a voice and slips into cliched indie floating style direction. Then there’s the screenplay by written by Pilieva alongside Walk the Line co-writer Gill Dennis (who sadly passed away the year the film was released) The story of the film overall isn’t bad and feels like it could have been a beautiful story about overcoming loss and how as we see with how Alice changes Charlie, how love can help someone heal. It’s with the dialogue that the film falters with some of it sounding natural but then there are moments that it feels like surface level attempts at being deep or something and not sticking the landing as it were. I can respect her falling back on Show Don’t Tell but it’s okay so have extended dialogue scenes. Also given it’s touchy subject matters of grief, suicide, growth and even child abuse (which is given a little too much detail FYI), it feels like Pilieva is afraid to fully commit to crafting a properly paced narrative to do it justice.

And that’s where the biggest problem with this movie lies: the editing and pacing. This movie feels like it was hacked to pieces in the editing room because it feels like editor Garret Price (who does a pretty meh job anyway) gutted entire story arcs and a second act just to avoid boring the audience. Scenes feel like their in the wrong order, happening later or earlier than they should in the story and it feels like we skip important character moments just to get to the next scene which should be a crime no matter the films budget. The editing during a montage of some of the commune members in the beginning in particular is very badly done. It does smooth out a little in a bed building scene later on but this movie is paced like if Lady Bird was on angel dust. Again, it feels like Pilieva is paranoid of boring her audience so instead of a slow burn she goes in the opposite direction and speeds through the story with reckless abandon, regardless how it affects the narrative.

Also this sounds like an odd critique but the music in this movie was awful. The indie songs feel lifeless and generic as hell, often sucking the emotion out of scenes or like the director is playing their SoundCloud link, veering sometimes into self-parody. I had a similar problem with the otherwise good film A Light Beneath Their Feet where the music doesn’t fit the movie. Even the regular score by Mark Mothersbaugh feels like it was written in five seconds and not particularly well crafted which a shame because Mothersbaugh has shown himself to be a versatile, solid composer.

That being said, the cinematography of the film by Andre Lascaris was good, with a soft color palette and decent mood lighting.

And so to wrap up, Forever had a lot of potential and in many places does live up to it but was undermined by meh direction, terrible editing and a pace that moves so fast it feels like whole scenes are missing. However, the acting is good all around, the colors look nice and the overall story isn’t terrible, all anchored by a solid performance by Deborah Ann Woll.

I actually would recommend this movie to judge for yourself if only because of how obscure it is. Shame the bad editing and pacing got in the way.

Nat is out! Peace!