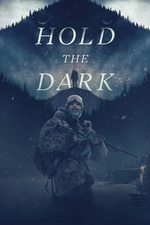 I absolutely adored this film! So much so clarity and focus escapes me and I am having about as much success at relaying my thoughts in a thoughtful manner as someone trying to wrangle a herd of cats! I must admit I have not read the book and after doing some research online I no longer have any intention of doing so, for that story reduces this wonderously enigmatic mystery into fodder for sensationalistic journalism like CourtTV! I'm thankful for the ambiguous nature of said film and applaud director Jeremy Saulnier for the good sense to leave it open to multiple interpetations! In the end I found my interpretation to be far better than what novelist William Giraldi had intended!

I couldn't help but think Russell Core (Jeffrey Wright) and Medora Sloane (Riley Keough) took "speak softly and carry a big stick" to new heights and I've got the welts on my flesh to prove it ;-) I was mesmerized every time these two characters were onscreen! Vernon Sloane (Alexander Skarsgård) and Cheeon (Julian Black Antelope) did all the heavy lifting as far as serving as human exclamation points in the film!

Warning Spoilers ahead, if you haven't seen the film stop reading Now!

My very personal take on the story made for a rewarding experience.. I preferred seeing this from the perspective of the indigenous population of Keelut's eyes! Thereby nature, spiritualism, tribal lore and tradition combine forming the lens I view the storyline from as opposed to the storyline propagated in the book insinuating those who choose to live independent and isolated from the supposed societal norms are in danger of reverting back to our most barbaric and primal selves! Not at all impressed with the notion of giving up traditions and beliefs to become one of the mindless herd! I dunno about you but primitive man built a solid foundation that allowed us to thrive, they never killed out of greed or for power! I'm more afeared of the men in suits and ties in our government they're the real killers and they do it on a scale that would make Cheeon's bloody rampage look like a Church Social! I believe most of our problems are a result of straying away from our connection to mother nature! Domesticating and citifying ourselves and exploiting nature instead of championing and honoring her will be our undoing! Instead of migrating to big city life and becoming good lil consumers that make the filthy rich richer and the air even more unbreathable, and the lakes, streams and rivers undrinkable we should be questioning our priorities in life and stop contributing to the problem!

Something bad was looming on the horizon! Only the animals and those whom are one with nature could decipher the early signs! And the signs were there! Just follow the bread crumbs... after the local witch describes the events of influenza outbreak and how people suffered further pain and suffering in the form of wolves the eve of that disaster so I came away with the conclusion that all that had transpired in the film was pointing to another catastrophic event coming to fruition in the near future!

Generally speaking wolves simply don't attack humans! In the rare instances that they do there are outside forces instigating the attack! Starvation, Sickness, Rabies, or as a result of feeling threatened or cornered for example! Something was causing these wolves to go against their very nature! Again there is something in the air.. something just isn't right! As Medora repeated several times throughout the film there's something wrong with the sky!

It was no coincidence both the wolves and Medora killed their offspring! Illustrating the theme that something is horribly wrong! Animals will kill their own young if it feels they, the pack or the offspring itself is threatened! So the deaths of the wolf pup and son served as ominous warnings, signs if you will of bad things to come! On the other hand the writer may have been alluding to beast and man being one in the same neither of which hindered by manmade ideologies involving ethics and morals! There is one law of the jungle "Tis better to be the one doing the eating.. than being the one whom is eaten" at least up until the invention of the mythical creature Civilized Man came into play that is ;-) I believe Giraldi's story very much deals with the myth of domesticated man! We are all just one step away from ripping out someone's jugular with our teeth! Civilized is something we tell ourselves to feel good about ourselves, suits and ties are merely accoutrements to carry off the facade! Don't believe me check out what we spend a year on war and war machines, weapons, planes and other delivery devices of death.. now check out what we spend every year on the weak, sick, disable, the poor and vulnerable in our society! We're not any more civilized than our cavemen dwelling ancestors! Better weaponized.. You betcha ;-)

I've seen the film for 2nd time today and it has become an all consuming adventure.. however it is leaching into my every thought and distracting my attention away from another film I tried watching earlier today! It is time to move on to my next adventure!