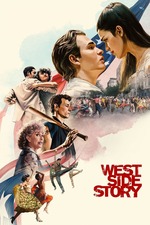 “The last of the can’t-make-it caucasians.”

Nothing short of a stroke of genius to set this musical within its actual historical cultural context. Literally genius. First fifteen minutes - and I’m not exaggerating here - are a literal masterpiece. Total perfection.

This movie is so good that it did the impossible: it made I Feel Pretty seem like it’s a good song.

“I know all of your names.”

Spielberg made a movie from a source material that everyone knows, especially the people who will flock to see it in theaters. And what he did was inject it with so much creativity and color and rich texture that every frame makes you scream “Look at that!” This movie is completely gorgeous, every scene was filled with shots that just blew me away. Spielberg and production team filled this with energy and life to a degree that I didn’t think possible. Totally fulfilling if it’s your first version of West Side, and if it’s tenth, or your hundredth. It’s new and familiar in all the best ways.

Cannot give enough credit, however, to Tony Kushner’s script. Centering the other characters beyond Tony and Maria, making it about not just the gang war, but the systemic problems that create the gang war - the racism, the poverty, the violence, the corruption - it enhances the entire production from something that could just be fun and entertaining to something that truly has something to say, something that is bigger than these people. This is a system that has created this situation a million times and will do it again, and the system keeps on rolling.

At the end of the day, I love the direction, I love the design, I love the screenplay, but I just adore this musical. I’ve known these songs my whole life, I know them better than nearly every other musical. ‘America’ is one of my favorite musical numbers of all time - the repeated three beat hit in the dance interlude fires me up like nothing else does. The group scenes are like nothing else - Krupke, the Mambo, the Rumble, all of it. Perfection. Seriously.

I had reservations about this movie (for obvious reasons, though he blessedly didn’t feel like the Main Character). But I’m glad I finally watched it. I look forward to watching it again.