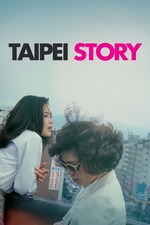 From the opening shot, already can we see the collusion of Antoinoini and Ozu that will reach its fullest manifestation in Yi Yi, but to write about an artist such as this one in merely cinephilic terms barely can scratch the surface - if not an outright disservice. On initial viewing, the riffing on Antoinoini is obvious - indistinct relationships between shot geography and the individual characters within these shots, as always indicating isolation if not complete alienation between two characters that are even in a relationship. But where this starts to deviate from both of Yang's influences is significant: a distinct political dynamic which only becomes clearer upon multiple viewings - even though the basic idea of the central relationships collapse remains intensely moving. Hou Hsaio-Hsien and Tsai Chin work on two levels - as distinct characters, and walking metaphors. This isn't just a portrait of an entire country in transition - but as Filipe Furtado writes: "A monument to all the things left behind during the unforgiving process of forging an identity." Yet, there's more than the mere existentialist nature of that comment: the state of transition is between traditionalist Confucianism and modern capitalism. Where will Hou and Tsai fit into this arena? Hou is the male: the Confucianist world revolves around him, whereas for Tsai - capitalism actually provides more freedom to a woman than the traditionalist standards could have ever afforded. The question then becomes one of regression and progression: Hou is incapable of moving forward, while Chin cannot help it - regardless if she even wants to or not. This films provocative brilliance is in part that not just do these lived-in characters also work as metaphors, but that the state of political transition itself is turned into a battle of the sexes.

Because we are working on the level of both the literal and metaphorical at once, writing about this film feels almost like writing about two different ones - this speaks not of any form of dissonance, but rather its sophistication. The sequence of Chin's being laid off from work is exemplar: the rapidity of her rise up the ladder in the workplace begins to appear a threat to her higher-ups is more universal than cultural - but the scene following allows us to soak up the emotional impact of the political implication: Chin going home, refusing interaction, entering total solitude. Hsaio-Hsien's is almost more abstract - not quite the abstract fatalism of The Terrorizers, mainly because there is a more distinct purpose: spending time at the Little League ball games, watching children while distinctly separated from that experience via the placement of the gate: reality also becomes mis-en-scene. It's maybe the most cynical scene in this film - Hsiao-Hsien's world is dissapearing, and the way Yang's camera lingers is as though to imply that these children will share the same fate.

On repeat viewings, I have to admit a couple sequences start to become a bit boring because they do work solely on the relationship level - nevertheless they still remain remarkably moving because of how personal the discourses seem: while the metaphors take a break, these segments have the tenacity of lived experience. While many early works make the mistake of delving too deeply into the specifically personal, here it still manages to affect - this is something that frankly comes down to the performances. Yet - Hsiao-Hsien's collapse (or death?) fails completely on a melodramatic level - it only works when taken in metaphor for the end of traditionalism. However, compared to Chin's trajectory - which works both on the personal and the grander scheme - it's tiny things like this which make this occasionally unbalanced (but hey, it's only a half star). The motorcycle ride is a perfect example: freedom in experience and revision of civilization at once.

Depicting cultural transition via and as the ending of a relationship - so why does the relationship end? The distinct human needs of the characters provide the answers to the political shift. But maybe because of this, it's actually kind of hard to write about! But it's worth noting - Chin is the one, socially, who benefits, while Hsaio-Hsien, is more or less dead. But Chin, perhaps even more so than HHH, doesn't want the relationship to end. It's HHH who is stubborn, clings to rigid rules which no longer have meaning, helps out Chin's deadbeat father financially - even though we've seen him treat Chin as though they're living in the 1940s. When Chin puts the glasses back on in the 2nd to last shot - she is not necessarily rejecting anything, but realizing the inevitable: the tragedy of culture shifting is the inevitability of something being left behind - something or someone is going to fall to the wayside - it is fact.