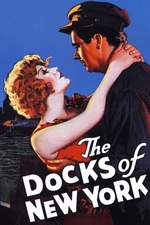 Truly as perfect as cinema could possibly be, as much a nexus in camera movement as it is in human emotion. Perhaps it's not as interesting as later Sternberg's, not quite as abstract, not quite as fatalistic. But its sheer romanticism, its utter sincerity makes it no less important. This is a movie that's been with me since I was a child, picking up the old VHS with the Gaylord Carter organ score from the library as much as I possibly could. I wanted it to be with me, always.

Where to start with this impossibly beautiful film? Far from the (also incredible) madman's mis-en-scene of The Devil is a Woman & The Shanghai Gesture, every movement of the camera here serves a specific purpose, two dollies in signifying the discovery of a new location, one dolly out signifying the end of a relationship, and and one dolly out signifying the rebirth of another one. And so we enter Sternberg's dreamworld, covered in nets, mist and light. The moon is out: the fantasies come to life at night. We see that suicide can be transformed into love, that a prostitute and a longshoreman can get married as a gag yet not bear to be apart from one another. In this mist we see the reality of the split second where sexual attraction becomes emotional attachment. These people are bitter..cold hard cynics, complete fatalists. Yet miraculously, they rediscover faith. Faith to continue living..faith to love another person. Unlike later Sternberg's, there are simply no masks here.

Visually it's perhaps Sternberg's least avant-garde, yet still maybe his most gorgeous to look at. In the films condensed 75 minutes light serves a purpose more than simple signifying. Light simply exists, it illuminates things, gives it texture changes ones perception of objects in it's wake. In his autobio, Sternberg half-jokingly calls himself "the manipulator of imponderables." What are these imponderables? Is it love? The lack of it? Though the couple remain "together" at the end of this film, it's no romance in the conventional sense of the word. In this 12 hour period condensed into 75 minutes this couple break up and come together again maybe three times. And there's a second couple, seemingly here to contrast the primary one as they begin the film with no faith in each other and progress to lose more. But there's no reason for the film to contrast the two seemingly, because this romance is realistic enough already. Then perhaps, maybe this main romance is actually intended to contrast the second one, not the other way around. To show that some romances fail, die, end in pain...yet it is still not a crime to be idealistic. To show us that the films final lines of dialogue do not necessarily have to be the words of fairy tales.

"Sixty days ain't a long cruise. And it'll be my last one, if you'll wait for me."

And then the camera pulls out, two lovers are reunited and life goes on, another case goes to the night court. So maybe this could happen to everybody.