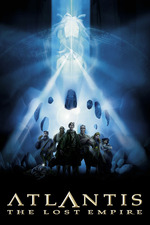 I swear to the Atlantean gods I was the perfect target audience for this when it came out: an action-adventure junky white boy who was also a gay-as-hell Disney lover

now? I’d be lying if I said I wasn’t biased towards still loving this weird little experiment from Disney

the pacing is GOD-AWFUL: the first act is insanely rushed and truncated to the degree that the pace at which exposition was being delivered was legitimately making my attention deficit and anxiety issues go to code orange while the latter acts start moving at a comparable snail’s crawl while somehow STILL not devoting enough time for character development outside of a few scant lines of dialogue (the latter half is PARTICULARLY egregious when you’ve got MOTHERFUCKIN’ MIKE MIGNOLA providing character designs for some of the most consistently fun and diverse supporting characters Disney’s ever come up with)— the whole thing’s over before it even feels like it started!

so do I still love Atlantis? of course— absolutely— I always will— but it was just such an interesting experience watching it as an adult and for probably the first time just really seeing something and thinking, “man: what I wouldn’t do to get a chance to fix this movie”

oh wait: DISNEY COULD TOTALLY DO THAT BECAUSE THEY INSIST ON REMAKING EVERYTHING EXCEPT FOR THEIR MOVIES THAT WOULD ACTUALLY BE PERFECTLY SUITED FOR LIVE ACTION REMAKES