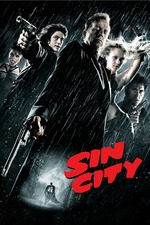 PART ONE of an intermittent series of watches I’m calling “GRAPHIC NOVELISTS SHOULD MAKE MORE MOVIES”— starting with one I’ve seen before and one of the most easily accessible on my list: SIN CITY

I’m a huge fan of the original graphic novels— so I’m glad to see the movie hold up just about as well!

it’s an homage to pulpy noir fiction of old with everything cranked up to eleven— from the good (all the leads have voiceover with deliciously cheesy dialogue, good guys beating up bad guys through bad means, swathes of the cast look like warped Dick Tracy characters) to the bad (I’m sorry— I don’t care how badass you try to make some of the women look by giving them guns: it doesn’t excuse using most of them as props)

by trying to cram so many stories into one package— you run into a few issues of all of them trying to usurp the spotlight, some pacing issues, some being better than others, and most of them sharing VERY similar plot beats (I know they’re supposedly working on one now, but this would work so much better as a TV show)

the sheer style in this is just completely unmatched— I don’t entirely care if it’s style over substance or if some of the visual effects are a little dated— this movie is IMMACULATELY shot, framed, and colored: practically a shot-for-shot translation of the original novel (to the degree that they don’t even put up a screenwriting credit in the opening) and it SHOWS in that every single shot in this movie just oozes with the bloody, pulpy style and skill of Miller’s original drawings: set an absolute precedent for stylized comic book films that wouldn’t even come close to being matched until Scott Pilgrim vs. the World and Into the Spider-Verse: who else but Robert Rodriguez could’ve pulled this off?

what can I say? it’s flawed— sure— but this is just such an insanely enjoyable film to watch with an unmatched style and a stacked cast soaking it up with all the noir trappings: if you can indulge in a little of its sins, it’s a hell of a time