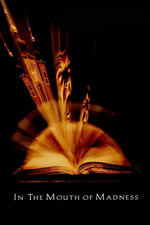 "In France, I'm an auteur. In Germany, a filmmaker. In Britain a genre film director, and in the USA, a bum." - John Carpenter

The man, the myth, the Legend. For over 40 years John Carpenter has been a staple in genre filmmaking, creating some of the most memorable and Influential films of our time. He's had huge hits, massive failures, underrated gems, and an amazing resurgence with his musical career. As a matter of fact, every few years a different film from his catalogue seems to be reevaluated, as if ten years later audiences finally "get it". Growing up I remember my first Halloween without adult supervision... I made a giant bowl of popcorn, sat myself in front of my Dad's big screen TV and wanted to watch something scary. There it was, on some cable station... "John Carpenter's Halloween". From the moment the music started I was immediately on edge. I'll save the rest of that story for October, but I will say that to this day, it's still my favorite film along with Psycho.

Shortly after that first experience I noticed Mr. Carpenter's name on some other movies at the video store, movies like The Fog, Big Trouble in Little China, and Escape from New York. My father was a huge fan of the latter so we rented it, and so began my love affair with Kurt Russell. Shortly after that we watched The Thing from Another World followed by John Carpenter's The Thing. Growing up I knew the names of three directors; Alfred Hitchcock, Steven Spielberg, and John Carpenter, but after The Thing, I knew I had found my favorite director.

I was born in 1985, making me about 10 years old when this hit the video store shelf, the perfect age to be scared shitless by this nightmare fuel, and setting in motion a lifelong obsession with H.P. Lovecraft. It's also the final entry in Carpenter's "Apocalypse trilogy" after The Thing and Prince of Darkness. Great cast, some primo K.N.B. Effects, a cool Carpenter soundtrack (naturally), a stellar performance from Neill, and a gut punch ending makes this one of the top genre films of the 1990's.

A bare bones blu was released a few years ago and is readily available and decently priced. I wish Scream Factory would do a Collector's Edition blu like they have with the majority of Carpenter's films. One can only hope!

DO YOU READ SUTTER CANE?