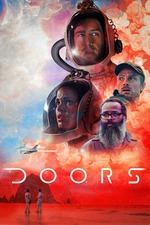 Doors fits perfectly into the early 2010s horror anthology craze, namely the VHS franchise, where experimental horror auteurs throw their bonkers, Lovecraftian ideas on the wall and see what sticks. With its ambiguous yet artistic dive into the theme of the unknown, Doors is as niche as can be, made specifically for its niche arthouse horror audience who are bound to be head over heels for this one.

With multiple loosely-connected segments that depict the apocalyptic aftermath after mysterious doors appear all around the world, sucking people in with their hypnotic powers, Doors is simply atmospheric filmmaking at its finest, with heavy input of lush visual and eerie sound effects that's both mind-blowing and hair-raising. Other than its devastating account of a dying planet, Doors is also admirable with its subtle symbolism, covering topics from human guilt to race relations. The tonal inconsistency between different sketches in a way gives this already unsettling experience another layer of surrealism.

Admittedly some segments are way better than the others, with the Kubrick-inspired Knockers segment being the absolute best. Overall, however, Doors is still a rather decent horror anthology that's going to stick in my mind for a very long time. Highly recommended.