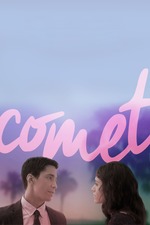 "A few parallel universes over," is a title card which opens the ethereal Comet, a romantic dramedy, in which Justin Long and Emmy Rossum play two neurotic lovers who's relationship will span over 6 years.

That may sound unabashedly twee to some. Hell, it certainly takes a while for the toxic animosities of two souls to transcend their motormouth rhythms. And we're talking ceaseless gabber. Their lips are barely interlocked.

There is a lot of zippy, chattering and philosophical introspection about so much here. It's virtually non-stop. Both actors are firing a slew of rambling discourse about love, dreams, narcissism, detachment and the enigmas in our universe. You've also got a load of various pop-culture references that range from Roald Dahl, 2pac, The Beatles and even Jack Tripper. I'll let you decide if all of this will draw a fine line between the immensely likable and intensely irritating.

As for me, I firmly sit in the middle.

It does need to take a breather. All of the agitated verbiage is so persistent that it negates a chance to establish a clearer character arc. That is a major fundamental for a film that is centered around two people. Due to this, Comet is simply content to let Long and Rossum riff for a while. Slight progress will be made, sure. It's also affecting in that progress. He becomes arrogant and she gets flighty. Massive emotional feels are evident in their dramatic fall-out. It just takes a considerable amount of time to achieve the requirements.

On the contrary, both actors manage to really slide into this dialogue—making it sound effortless and equating the banter with sharp chemistry. They're successful in delivering this endless sea of repartee. I was convinced by their responses to each other. I wasn't so convinced in how defined their characters were, though.

It's also a film of immeasurable ambitions. I really have to commend writer-director Sam Esmail on his tricky narrative structure. He's time-hopping through a handful of various threads that jump between Long and Rossum in-and-out of their relationship. It's occasionally difficult to pin down and I appreciated the creativity in that. Like an attempt to channel Eternal Sunshine of the Spotless Mind, but naturally, a bit inferior. It's not the easiest task to draw inspiration from that film.

In depicting these threads, we first meet Rossum saving Long from being hit by an oncoming car at the Hollywood Forever cemetery. Then we suddenly jump to a random day on the street as they discuss their fateful night in a Paris hotel room. After that, we're transported into that very room in which impetuous thinking and fervid tension is shared through the haze of marijuana smoke. Soon enough, comes the telephone conversation fall-out (which I must say, is brilliantly performed by both actors) and the ultimately final attempt to need reconciliation and acceptance is delivered with real grace.

Visuals are also a powerful correspondence to all of this. Nothing can beat the otherworldly glimmers of a meteor shower on their first meeting. I also adored the exquisite framing of blues in the Paris hotel room as it's enhanced by an Eiffel Tower image. Esmail creates a very specific example of recollection in the mise en scène. It's really quite beautiful.

Still, I wish that Comet could eclipse the self-awareness of the words and just know how to soulfully represent these people. It explicitly raises so many topics and both actors are always sharing. But sharing isn't necessarily caring about who they really are. Yes, I loved the fragmented storytelling structure as well. Yes, the ambitions and visuals are compelling. Yes, I will definitely be looking forward to whatever Esmail does next. He has talent. But I'm sadly inclined to give this a half-hearted recommendation as it couldn't capitalize on the truest cores of a romance. Oh well, it's still alright.