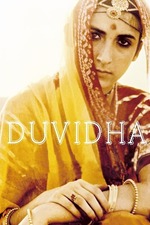 Even nowadays I can still find a formal genius that eluded me. Hadn't heard of Mani Kaul until watching this—who employs mesmeric techniques that aren't just creative for Indian cinema, but on an entire global scale. (There's a "frozen" eeriness to Duvidha—a tree ghost who's caught between dissolving still-frames of doco landscapes and a folklore fiction narrative.) Most impressive is that Kaul unearthed this with a hand-cranked camera and shoestring budget.

Loved the alternation between Kangra artwork and the ardent gazes of young bride Lachhi with her husband Krishanlal who experience rural disorder. (Even the pensive conversations seamlessly turn character blocking into off-screen narration by various people.) From then on, a sense of desire is conveyed with rhapsodic folk music upon a headlong phenomena story. Cue the slow zoom-out as a lonesome specter is materialized in human form.

Reason being: Krishanlal plans to venture on a five-year trip and obtain wealth. As he leaves Lachhi, unbeknownst to the fellow villagers, a ghost appears as Krishanal and gradually falls in love with her. I liked its empathetic viewpoint, too, since she's told of this scenario and thus spares her of being deceived. Besides that, I did want a more cogent connection in their marriage, as it briefly emerges when the real husband returns. Even together, they appear isolated, which is my sole grievance.

Ultimately, this blends the concept with content, exemplified by the ghost-husband and true-husband who are decided by trial. Kudos to how coherent the cross-cutting is because it's impossible to tell the difference. By the end, I genuinely cared for Lacchi's half-a-decade investment for her phantom, who she comes to feel a sorrowful tinge for. (As he is trapped, so is she.) Seek out this beguiling, inventive drama that initiates a cinematic medium of its own.