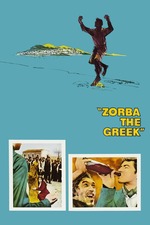 This dares to uncurl any cynic's stiffed lip by showing an eternally powerful tale about the abundant zest for life. In many ways, Zorba the Greek is personified through the genial ebullience of Zorba. More universally, he serves as a refreshing alternative to the social strictures of a barbaric civilization which have tried to mold him into one of them.

The fact he can gallantly persevere through the ignorance of his fellow Cretans is its greatest stronghold. It also offers conclusive knowledge about the culture specifically. Just as imperative is how it examines the countrymen as a lesson of vital and human development.

A most turbulent film of beauty, tragedy, hope and dance that was gloriously sprawled out on the big screen. It's officially one of my very favourites now.

Anthony Quinn so exuberantly and physically enlivens a role he was destined to perform. Alan Bates musters up the life experience to appreciate what couldn't be taught in books. Irene Pappas is so instantly empathetic as the most tortured widow to ever grace the silver screen. Lila Kedrova is courageously hopeful as the old woman who continues to see a peering glimmer amongst the cruelty.

The unforgettable portrait of these seemingly old relics who can still prod along. The ability to alter the repressed and inflexible beings will forever affirm by critiquing a person's place in the world. To yearn a revisit on the sunbaked hills and rocky shorelines of my homegrown island. The connection is there.

It'd be tempting to continue a hefty analysis on Zorba the Greek. From the hauntingly innovative moments of editorial skill, to the wisely sage advice and its tricky portrayal of religion, politics and indecency that are used to shape the world as it is.

I'm ambling along when it isn't deemed necessary. Instead, let's try to not refute Zorba's own philosophy about uptight fools taxing hard on their thinking caps and being unappreciative of what is truly the sultan's pleasures.

This is one of those monumental pleasures. It'll stay and age like fine wine. They really do not make them like this anymore.