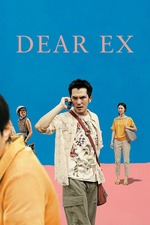 god, this movie really broke me.

the camera work and transitions are gorgeous, lighting and set design are beautiful, and the script is humorous and witty and heart breaking all at once. song zhengyuan's ghost haunts the film, an absent presence structuring the film. his presence becomes even more palpable when you realise that both ah jie and sanlian fall in love with him on the same day, in a creamy romantic daze. at the same time, structurally, the pain of the present forces a knowledge on you that this fleeting happiness of love isn't meant to be, and you brace yourself, and wait. it's so pointlessly poignant and poignantly pointless that the title questions who fell in love with him first.

one thing that stood out to me were the scribbles over ah jie and zhengyuan's faces when they're just being together. the scribbles evoke the kinds of censorship that lgbtq+ people face on the daily within "conservative" asian societies, a damning call-out of how difficult it can be to just be yourself.

sanlian really got on my nerves at first, and sure she's misguided and she really says the wrong thing sometimes, but she's really out here trying to be a good person-wife-mother and she just wants to be happy and it breaks my heart that her labour is always undervalued and overlooked as annoying. she makes me feel so so so guilty bc i see a bit of my mum in her and i really do love my mum, although i never tell her that i appreciate her.

it feels like no one wins and everyone loses, and it also feels like that's just life. but if 正常的 is so restrictive and damaging and so painful, shouldn't we just live ourselves?