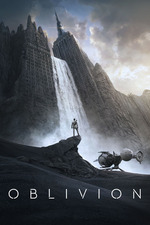 An easily forgettable film. Oblivion uses so many sci-fi tropes and steals ideas from so many other movies that it has no identity of its own. With that said, it’s enjoyable enough that you won’t regret watching it. And you don’t have to worry about thinking too hard because everything is explained to you in painstaking detail.

Favourite Character
Beech. Tom Cruise’s character is fine but Morgan Freeman stuck out more to me.

Favourite Scene
The desert scene where Tom Cruise fights himself.

Best Quote
Sally: I created you Jack. I am your God.
Jack: Fuck you, Sally.

Fun Fact
The opening scene with the Universal logo shows just how damaged the Earth is. The oceans have receded, there are craters the size of entire countries, there are no ice caps, and even the word Universe appears worn out.

If You Liked This Then Watch..
The Edge of Tomorrow (2014). A much more enjoyable Tom Cruise Sci-Fi action movie.

Question
Who in Hollywood has a better voice than Morgan Freeman?