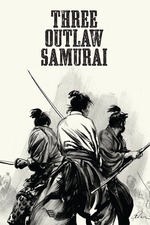 A hard-boiled, pulpy, damned near nihilistic samurai picture where the traditional themes of honor and loyalty get totally upended? Yes, please.

How's this for an intro? A lone ronin (Tetsuro Tamba) wanders through the woods at night when he stumbles upon a young girl bound and gagged in an abandoned mill. Inside he finds three crazed peasants threatening to slit her throat. It soon becomes clear that the girl is the daughter of a local magistrate who has been kidnapped in order to force her father to enact economic reforms. In any other film, the hero would try to outwit the kidnappers and save the young princess. But in Three Outlaw Samurai, our lead decides to aid the peasants, essentially allying himself with a band of medieval terrorists. The samurai's rationale is that the bumpkins have a justifiable case against the magistrate, so he can overlook the fact that they are putting an innocent's life in danger. Right away director Hideo Gosha proves that his movie lives in a world very far removed from the black-and-white morality of most of its peers.

Eventually we are introduced to the other two samurai of the title (Isamu Nagato and Mikijiro Hira), each of whom gets involved in the peasants vs. ruling class struggle while residing in the same moral gray area as Tamba. They often act more out of convenience or self-interest than high-minded ideals, and their loyalties shift between the oppressors and the oppressed according to the prevailing winds. It's all very effective from a storytelling perspective, as the viewer is always left guessing which side the divide our anti-heroes (or maybe anti-villains?) will eventually find themselves.

Gosha doesn't limit his slippery morality to his three protagonists, either. Good people may suffer and villains may go unpunished, but more significantly good people are shown as occasionally venal and cowardly while the villains are more petty and bureaucratic than downright evil. Violence often occurs without provocation, or worse still, it's rationally explained but morally outrageous. A surprisingly high number of people end up suffering some unfortunate fate, and a happy ending for anyone is never guaranteed. Though outwardly the film resembles the epics of Kurosawa and Inagaki, its heart is more aligned with the grittiness of Pickup on South Street-era Samuel Fuller. But make no mistake: Gosha knows how to make a good samurai movie, replete with excellently-staged swordfights and lovely production design to recreate its period setting. The pacing of this movie never misses a beat either, economically introducing its setup and then letting things hum along at rapid speed. And I know that I've said this before, but I'll say it again: widescreen black-and-white cinematography is like heroin to me. So let me point out that Tadashi Sakai's photography for this movie is absolutely gorgeous, with an eye for dark exterior scenes that rivals the best film noirs.

I can't say how much of my excitement about this film derives from the fact that it is so different from what I was expecting it to be. I'm kind of overlooking the fact that some of the plotlines (such as Nagato's infatuation with the wife of a man he's killed) don't really work within the larger context of the story. Gosha also takes his film to some places that feel bleak for bleakness' sake, rather than allowing its tone to arrive there organically. But as a decidedly lurid spin on the samurai genre, Three Outlaw Samurai feels like a breath of fresh air.