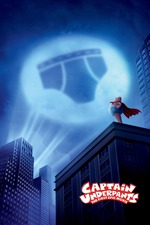 I take to the skies...like an ostrich!

So I missed out on seeing The Last Jedi as I have come down with some kind of stupid illness that has me pretty much bedridden. So I decided on some easy-watching that wouldn't require me to think. What I got was a surprisingly good movie with a few solid laughs and a bunch of heart.

On the surface this seems like a movie filled with jokes for kids. The villain's name is Professor Pippy Pee-pee Diarrheastein Poopypants Esquire. There are jokes about Uranus. It is filled with potty humour, quite literally. Yet, deeper down, there are some clever jokes aimed at adults too. The majority of the jokes land as well.

The voice acting is all great, although Kevin Hart just played a kid with Kevin Hart's voice...he doesn't have too much range in any of his roles but that's a problem I have with him, not this movie.

I also really liked the animation in this one. It didn't look as good as the LEGO movies or even other Dreamworks films like How to train your dragon or Kung Fu Panda but it was still nice with no real flaws.

The only flaw I could really find is the story is generic as all hell, but that's not entirely a bad thing because, as I mentioned before, it still has a lot of heart in the entirely predictable ending. They did it the same as everyone else, but they did it well.

Overall, you can do a lot worse when it comes to animated movies, so if you wanna laugh at some silly jokes and have your heart strings tug on a little, check it out!