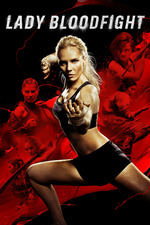 It's essentially a female cast remake of Bloodsport, with flecks of Kickboxer in there for good measure. I half expected Van Damme himself to cameo as the heroine's dad. No such luck. Nevertheless, the movie is still pretty great for what it is. Amy Johnson is a badass lady, and she carried the movie effortlessly. The movie isn't without its issues, but the cast isn't one of them.

The fight scenes are brutal and engaging. Well choreographed. If we're being honest, some of them are even better than the usual Van Damme stuff from back in his early glory days. Coming from me, that's no small claim. I love Bloodsport and Kickboxer. Lady Bloodfight edges past the recent Kickboxer: Vengeance as the better (pseudo-)remake that anyone could want. In Kickboxer, Van Damme had to "kick the tree". In Lady Bloodfight, Amy has to "ring the bell"

I think that brings me to my biggest complaint about this movie. It fails to really sensationalize its own material. "Kick the tree" will stick in your head. It was such a focused-on moment, that it became like a kitschy mantra. It was catchy. You can yell it at your friends, put it on a bumper sticker, etc. "Ring the bell" never reaches that level. In fact, none of the "moments" in Lady Bloodfight ever do.

It's also lacking the rousing music that its two predecessors had. Lady Bloodfight isn't 'catchy', but it's a more grounded film...? I kinda hate saying 'grounded' in a movie that's as inherently absurd as this, but compared to the Van Damme vehicles of the 80's, it's definitely grounded by comparison. Having said that, its characters are fairly memorable. There's one villainess in the movie that gave me chills. She was like the female Tong Po. I really wish that somehow the movie had made her the final villain. She had that iconic bad gal potential.

Also, I'm not sure if Lady Bloodfight is angled towards a female audience or not. It does seem pretty preoccupied with catering to the male gaze at times. Of course it also wastes no time having the heroine kick the ever loving shit out of the usual male detestables. The kind of 2 dimensional scumbags you wish were ONLY in movies. Ugh. But still, she gets hers, again and again no less.

Lady Bloodfight works despite it's more mature take on the material, but also because of that as well. It's a weirdly satisfying movie that never stoops to completely remaking Bloodsport or Kickboxer,but has enough familiar elements that it plays as a loving homage to them, and to the genre at large. I wish the movie was a little more 'catchy' and pop culture-y at times, but I'm not sure that would've made for a better movie.

Bottom line, if you wanna watch beautiful women beat the shit out of each other in a movie that won't insult your intelligence, and has a halfway decent story to boot- Lady Bloodfight is the movie for you. It's brutal, bloody, and pulls no punches. The characters actually feel like characters and not just action figures. Sure there are moments that strain the general levels of plausibility, but that's to be expected in a flick like this. All in all, I really liked it a lot.

I'm not sure why the Kumite tournament was all-female though. It's never addressed in-movie, except for the fact it's said off-hand that a particular guy was in one of the prior tournaments. Nobody ever points this out or explains it. There's no male competitors at all. I mean, by contrast there were no female competitors in Bloodsport, so maybe I better not yank on that chain. Either way, it was a bit odd to me that there wasn't even an off-hand comment about the all-female competition. Oh well.