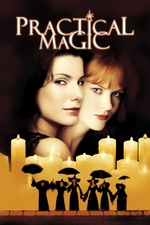 The following review is unfinished. I began writing it in either November or December of last year and it was never finished.

Thank you, once again, Netflix's streaming service. For making sure the variety of film I seek out in November or September, or most people seek out in October is only suddenly made available in December. I really want to be thinking about Christmas shopping, snow, and being hounded by terrible holiday music in the reflective moments of this borderline-Exorcist meets The Craft meets... Mystic Pizza / Steel Magnolias / The Butcher's Wife / Something to Talk About insanity that even I have to admit is stirred to perfection here. This is Charmed that both adult (housewives / single aunts) and their kids (babysitting charges and whichever of their vagina-having offspring most digs post-Jewel, post-Hanson, post-Garth Brooks' "dark" alter ego late 90's country-crossover) clearly dug.

Back in the day.

Now that that day has passed, I have to... tell you... that... this has aged beautifully. You're right to think that the passage of time is usually rough dealing and unkind to such specific products of Hollywood market-researched stewing. Especially to at least half of my last XY + Perfect Laboratory-Cooked Apps = Woman's Must-Have Accessory romantic comedy, My Best Friend's Wedding. For which I can't help but flashback on one Nostalgia Chick's review of You've Got Mail for how doggedly women are trend-targeted by Hollywood. Usually as insulting Self-Insert for the main character in a "story" about a hook-up surrounded by an absurd series of convolutions and Hollywood's task is to outdo their last most absurd previous offering. For yucks. And ladies are supposed to give up their weekly bonbon / bath bead dollars to show them appreciation for how much of the poster space they take up versus men, or if the movie is named after a female character.

Well... if Hollywood is hellbent on formulating everything and has to treat (any faction of) audiences like cattle, I say to you (at eternal risk of having things thrown at me)... I don't mind the idea that anyone might have stampeded the theaters to see something like this. If this is someone's guilty pleasure on the level of Kindergarten Cop, I think I can understand that. And I'm pretty sure that I hated this when I was in high school. This film where life itself is treated as a travelogue. Children wear berets. Families have ritualistic drinking song dances and diss sessions. You can tell these are people you've never met before because they own their own small town fancy botanical shop. Fancy in this case = atmosphere. But that's sort of what makes the whole film go 'round. I don't know what other reviews I've said this in, but I cannot dock points to a film if I believe its fantasy is well-constructed. It can be petty (but not spiteful) as its actors can pull off. (My cue to say Bullock is easily the weak link here.)