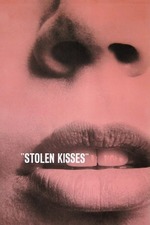 François Truffaut's Stolen Kisses reminds us once more that the French at their most felicitous are still the most civilized observers of the obsessiveness of love. Paris may no longer be the ooh-lah-lah capital of the world, if indeed it ever was, and the Eiffel Tower may no longer communicate as the world's most explicit erection, Truffaut's corny visual gag to the contrary notwithstanding. But somewhere in the streets of Paris the idealism of love still shines, even though the illusion of love is somewhat tarnished. At least in the slyly sentimental world of François Truffaut, that poet of love's sweet pain and excruciating embarrassment. There have been occasions in the past when I felt that Truffaut exploited his emotions more than he expressed them, and I feared the worst when I heard advance reports of the improvisatory looseness of Stolen Kisses. Happily, my fears were unfounded, and Stolen Kisses emerges as the most genuinely enjoyable movie, for squares as well as hipsters, in many a moon.

Truffaut's over-all career seems to alternate quite deliberately between the open, life-size lyricism of Renoir and Vigo (Les Mistons, The 400 Blows, Jules and Jim, "Antoine and Colette" from Love at 20) and the closed, genre-shaped fantasies of Hitchcock and Hawks (Shoot the Piano Player, The Soft Skin, Fahrenheit 451, The Bride Wore Black, and, I suppose, the forthcoming Mississippi Mermaid). Stolen Kisses is closer to the Renoir-Vigo influence than to the Hitchcock-Hawks — that is, more direct in its feelings and less inventive in its fictions. Actually, Jean-Pierre Leaud's Antoine Doinel exists as a biological continuation of the same character from tortured childhood in The 400 Blows through anguished adolescence in Antoine and Colette and now through muddled manhood in Stolen Kisses. As Leaud's (and Truffaut's) alter ego has matured, so has Truffaut. The director's canvas has expanded with the range of his sympathies to embrace more of humanity than ever before, and with emotional growth has come aesthetic distance. Truffaut can even confront his traumatic experience with the Army as multifaceted irony flickering across L6aud's volatile features. It is startling to observe how meaningfully different a persona Leaud projects for Truffaut than for Godard in Masculine Feminine and La Chinoise and for Skolimowski in Le Depart. Curiously, I have met all three directors, but I have never met Leaud himself. He exists for me purely as a figment of their imaginations, and I can never help seeing them through him, rather than vice versa. Truffaut's Léaud starts out seeming more vulnerable than the other two, but somehow winds up being more complacent both sensually and emotionally. Life cradles him more with its sentimental education. Whereas Godard's Leaud never understands even himself, Truffaut's Léaud comes to understand himself and everyone around him.

Fortunately, Truffaut's knowingness is tempered with observant humor. Antoine Doinel still has more luck with a girl's parents than with the girl herself (as in Antoine and Colette), but now this self-mocking gag is amplified to include Léaud's (and Truffaut's) alienation from revolting upper-middle-class students, who can never understand the quiet desperation of lower-class necessity, Truffaut expresses this alienation most economically by Léaud's blank expression when he is told that his girl has gone skiing while the student body is on strike. Léaud's reaction is a candid-camera miracle of instinctive incomprehension. Later when the girl (Claude Jade) complains that he mauls her in the movies, Léaud turns around with an anxious look at the girl's imperturbable parents, an instantaneous reflex of drugstore-candy courtliness that defines the decency of a class and a period.

The scenario of Stolen Kisses (by Truffaut, Claude de Givray, and Bernard Revon) is a perpetual juggling act by which harsh truths are disguised as light jokes. The sheer horror and inanity of competing in the open market for a routine job is hilariously summed up in a straight-faced shoe-wrapping contest, the outcome of which, to add to life's injustices, has been fixed in advance. Antoine's other jobs — hotel night clerk, private detective, TV repairman — mark him as a disreputable drifter capable, like Truffaut and his breed of break-out artists, of sinking all the way to the bottom in order to rise to the top. One day, we presume, Antoine will have learned so much about the human condition that he won't be able to keep himself from becoming an artist.

Amid all his careful calculations designed to suggest careless rapture, Truffaut does indulge himself in genuinely privileged moments worthy of Renoir and Vigo. The opening moments, for example, in which the delicate task of mine detection becomes a military metaphor for the equally delicate seduction of a woman, might have amused Renoir as a revelation of the French race. Antoine, released from the stockade, promises his comrades that he will make it with a Pigalle prostitute at five o'clock so that they can participate vicariously. Renoiresque camaraderie and all that, but in his haste Léaud-Truffaut betrays a contempt for prostitutes that keeps popping up in his most lyrical essays on love (vide Jules and Jim). Godard, by contrast, sees prostitution as a morbid, sordid metaphor for all human existence, a torture chamber in which feelings are broken on the wheel of economics. Hence Godard is completely antierotic, by virtue of treating eroticism itself as a capitalistic commodity. Truffaut retains his commitment to the elective affinities, but redeems all sexuality, even the most sordid, as an affirmation of the life force. Thus when a sort of father-figure to Antoine is buried, the distraught young man goes straight from the funeral to a streetwalker, almost as if the transition from the morbid to the sordid were prescribed as part of a religious ritual.

While stalking a homosexual's straying lover for his detective agency, Antoine participates in a Vigoesque privileged moment with a lyrical magician right out of L'Atalante. That Truffaut should pause to savor this rhapsody of colored fabrics and tinkling melodies suggests the furtive manner in which the director worships beauty for beauty's sake. Later when the distraught homosexual client goes berserk upon discovering that his lover is married, the magic act becomes the aesthetic correlative for a fit of madness. Gradually one obsession piles upon another until all Paris seems drenched with desire. Antoine's highest moment of civilized acceptance comes quite naturally with the spectacular entrance of Delphine Seyrig's not-too-married woman, a model of taste and discretion, with perhaps a dash too much of makeup and mannerism and literary sensibility, but delectably accessible withal in a way Alain Resnais never quite suggested in the icy realms of Marienbad and Muriel.

Finally, we are treated to our last madman, a persistent pursuer of Antoine's at-last-compliant Christine. The madman walks up to the two lovers and speaks of a more consuming love to Christine. The camera stays on the backs of the two lovers looking full-face at the madman. The shot is held long enough for the viewer to feel Antoine's hair on the back of his neck tingling with embarrassed identification. The madman departs. Antoine and Christine rise from the park bench. We see their faces. "He's crazy," Christine exclaims. "Yes, he is," Antoine answers with that quiet, almost reverent blankness on his face that reveals to us that we are all crazy, that all love is crazy. Crazy and divine. Godard makes the same point in Pierrot le Fou in perhaps one-tenth the time and with ten times the force, but he doesn't let us linger over it with any feeling of lyrical contemplation. He doesn't point it up with reaction shots and intersecting plot elements. Godard almost punishes us with his insights; Truffaut persists in pleasing us. And I am no longer sure which course requires more strength of character.

Not Andrew is using Letterboxd to share film reviews and lists with friends. Join here.