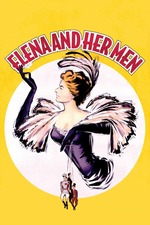 French Cancan generally disappointed Renoir's fervent admirers. Not that the film seemed a failure, but it was somewhat below the director's usual caliber. And this was even more apparent because it adopted - simplifying it to an extreme - one of the themes of The Golden Coach (La Carrosse d'or): show biz.

Italian comedy is one thing, Theater with a capital T, but the cancan? In making a plea for cabaret, Gabin also made a plea for Renoir, who had no other concern than that of making a "commercial" work. Popular, easy, but nonetheless worthy of its predecessors, capable of appealing to both the uncultured and the refined, and for the same reasons.

This arrogant and simple project was merely the result of an evolution whose significance, since The Rules of the Game (La Régle du jeu), we have not yet been able to grasp. Renoir, who at the start of his career declared war on clichés and opposed the public's tastes, left his conquests to others and returned to aesthetic or moral conformity. The cinema, no longer a springboard to bounce off new ideas, became a particularly good place to play with clichés, which a paradoxical mind such as his loves to nurture. Renoir loves cinema too much not to accept it as it is, with its vulgarity and, to be honest, its foolishness. Such is the "message" of French Cancan, if there is one to speak of.

Eléna is more ambitious, but this ambition must pass through an initial simplicity, a simplicity that is as complacently prevalent as in the preceding work. Conceived in the form of a fable, it has a moral that seems much more simplistic than the one expressed in Boudu Saved from Drowning (Boudu sauvé des eaux) or The Rules of the Game. It therefore obliges us, if only out of love for these films, not to stick to the initial appearances. Didn't Renoir himself warn us that cinema was a difficult art and that "in a large theater like the Gaumont-Palace, there may not be three people capable of understanding the film showing on the screen."

What does Eléna prove, then, for once again according to Renoir, "a film proves nothing but proves something just the same"? That nothing in life counts but love and eating well and that laziness is better than any action? This rule of life has its respectable patrons, Diogenes and Epicurus. What is more surprising is the brutal and linear form that Renoir gives it. By condemning Rollan, the puppet general, he condemns not only shoddy dictators but politics altogether. In mocking Eléna, the new Philaminte* or Madame de Chevreuse, he only thickens, with a fat pencil mark, the caricature that a particularly misogynous tradition, from Horace to La Fontaine, passing through the fables of the Middle Ages, has displayed to us in a thousand diverse forms. I know: "Eléna is Venus," but do we still believe in Venus?

Is Renoir merely rehashing the same truisms? If so, this must be a necessary exercise. Our century, though hardly prudish, has its taboos just the same. Work is one of them. "But really," one might say, ''what sense does it make to preach idleness?" - "It shocked you," he will answer, "That's a start." After all, a film is not a catechism; this word lazy is, of course, symbolic. We smile when a bum says it, but now the director seems to be saying it: That is what bothers us. To be lazy is still to preserve, in these hurried times, some taste for contemplation, for pleasure. Look at our classics, on which we expound so well but essentially forget to put into practice.

It is therefore not the least merit of this film to reinforce the meaning of some clichés. The proof that this is not a useless exercise is that we are suddenly surprised by maxims that were familiar to us when we analyzed Epicurus and Montaigne.

Everyone is free to use another key. I am adopting the one furnished by Renoir, when he uses the word classicism. He is trying to refer us to classical wisdom, rather than to the Hindu nirvana. The peasants, the bohemians of the last act, become a chorus of good ancestral sense, earth bound, as opposed to the glitter of an artificial civilization. This is not a materialistic film but, more precisely, a pagan one. And pagan, as we know, signifies peasant.

Let's go a step further, at the risk of being imprudent. There is always something reckless about explaining symbols. That is why I will limit myself to asking questions. Why does our blond and fair Venus, in order to be adored and to discover herself, need a black priestess surrounded by sad, dirty children who evoke the rituals of some freemasonry less open to "enlightenment" than that of The Magic Flute?** Why do all the masculine characters, including the "young" stars Jean Marais and Mel Ferrer, have an apish quality? In mentioning the word ape, we evoke an animal but also, at the same time, a puppet. Renoir is interested in both our most superficial crust and our deepest attachments to the earth. The soul is not rejected but finds shelter where it can. Man is perhaps merely an animal who apes man. The idea is both reassuring and terrifying.

Optimism and pessimism rub elbows with each other in Renoir's work, as do grimaces and gracefulness, masks and truth. You remember the film by Hawks in which a chimpanzee was not the most repelling actor? I am comparing on purpose the subtle Renoir to the least intellectual of American filmmakers. Both of them, traveling on different roads, one carried by the genius of his art, the other fully conscious of the genius of his art and his own genius, arrive at the same evident conclusion, one that cinema is best able to show. We live in both the best and the worst of all worlds, the most beautiful and the ugliest possible. That is why Renoir, more and more, is getting away from the picturesque, which easily offers him both ugliness and beauty. He prefers to reveal the animal beneath the tailcoat or uniform, the satyr beneath Adonis.

I am not trying to suggest that our director is a puritan. The Ancients had reason to couple Venus with Vulcan, the nymphs with the fauns. There is probably an admission of an obsession close to his heart here, which we constantly discover in the course of his work, but he never ceases to give it a more universal significance.

According to the seventeenth-century classical canons, the art of burlesque is to speak "of little things in a noble fashion." It seems that in this farce, Renoir does exactly the opposite, as he treats the most serious actions mockingly. But in truth, he works less with a noble reality than with the caricature that it inspires. Without dulling it, he embellishes a portrait in the Caran d'Ache style, heightens the tone of an Epinal imagery that is its true subject matter. Such is, I believe, his secret here. Far from simplifying, he portrays life's liberty in a schematic style from the start. Nothing is easier for a mediocre filmmaker than to move a marionette, and nothing is more contrary to the genius of cinema than mime. Renoir knows this better than anyone, but his mastery is such - he did such a long and brilliant internship at the realist school - that he plays with the difficulty on which others stumble.

In this case, the art must not be grasped in great chunks, but in its embellishments, which is why a second, even a third, viewing is necessary. Little by little the puppets lose their mechanical gait, and we become sensitive to a thousand nuances in their acting that had at first escaped us and that explain the rather rough, angular dialogue. It is not that the characters take on more depth. Once again, Renoir tells us, still in regard to Eléna, "that he did not want to use psychology." We should interpret psychology in the meaning given it by nineteenth-century writers. His characters have reactions that are as predictable as, let's say, those of the Wolf and the Sheep in La Fontaine's Fables. Like the fabulist, Renoir considers no genre to be deserving of disdain, provided one can bring "novelty and gaiety" to it and, of course, elegance.

This comparison will perhaps shock the admirers of each of these men, especially, I believe, those of the filmmaker. But remember that Valéry restored the poet of Adonis in a rather majestic fashion, and in any case, why not grab the rope Renoir has thrown us, even if it is a tiny bit treacherous? His classicism is not spontaneous, like that of the Ancients or the Americans in Hollywood, but voluntary, like that of our French writers, and yet not at all pedantic. Like Molière, who brought the farce from the scaffolds of the Tabarin to the Théâtre français, he aims to "make men of honor" and commoners laugh with the same-sounding laughter. Cinema, one will say, had accomplished this difficult task since the work of Chaplin and Mack Sennett. Renoir has, in addition, a clear picture of what he is doing, which does not make his task any easier. He is unfamiliar with the disdainful humor beneath which so many others, less inventive and bitter, hide. He wants others to forget that he knows his classics so well, those of the cinema and the others, and the strange thing is that he succeeds.

Let us not be fooled by his aristocratic nonchalance or by the current simplicity of his style. Having mastered the traveling shot and depth of field, he now enjoys presenting us with a flat, choppy, discontinuous image, as if to evoke his own kaleidoscopic action. Don't you be fooled. One question, for example. What kind of shot is most common in Eléna? The master shot, you unhesitatingly answer. Well, the detail images are much more numerous than those of the whole, but by using the correct proportion, the director is able to give us the impression that we are seeing all of the set at each moment and that at the same time the characters are as close to our eyes as we would like.

One more example: Try to recreate the arm movement at the very end, by which, before sitting down to eat, Pierre Bertin expresses the moral - one of the morals - of the fable, and in such a savory manner. Try, and you will understand why Renoir cannot be imitated, and what a thankless task the critic has, who, using only words, must celebrate the merits of an art able to turn mime into something more subtle and eloquent than the most beautiful prose in the world.

* One of Moliére's Femmes savantes
**Nothing is less Manichaean than Renoir's world. The number three rules, as in the masonic opera by Mozart, whose libretto Hegel admired so much. Far from leaning toward renunciation, the director of The River searches for reconciliation. That is why there is always a mediating event or character in his works. A provisional mediation that could be considered Christian spiritualism (The Southerner, Orvet), as well as the spiritualism of the religion of Rabelais's Messer Gaster or that of the black masses. But listen to the song by Grêco . . .

Not Eric is using Letterboxd to share film reviews and lists with friends. Join here.