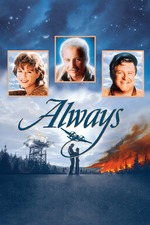 Was there no one among Steven Spielberg's associates with the intellectual stature to convince him that his having cried at A GUY NAMED JOE when he was twelve was not a good enough reason for him to remake it? True, there are flukes, and his remake, ALWAYS, might have worked at the box office and been acclaimed. But it could have worked only as a piece of gloppy, down-home mysticism—something unworthy of Spielberg's talent—or as a comedy about what the movie had once meant to him. Actually, it may be a sign of his mental health that he couldn't put much conviction into it. The 1943 picture—a Second World War morale booster about a flier (Spencer Tracy) who returns from death to watch unseen over the woman he loves (Irene Dunne) and encourage her romance with a younger flier (Van Johnson)—has been transposed to the present-day wilderness-fire-fighting service. Spielberg has caught the surface mechanics of forties movies. But he seems to have no grasp of how they worked-of the simplicity that made them affecting. He starts out with too much danger in one episode after another, and he overcooks everything, in a fast, stressful style. All he seems to want to do in each scene is get an audience reaction.

Balanchine had a simple explanation for his choreographic genius with dancers: I give them what they do best. Spielberg gives his stars, Richard Dreyfuss and Holly Hunter, nothing of what they do best. Dreyfuss, a put-on artist, is just too light for his role as a daredevil hero; his transitions are too facile. He has been made creamy-skinned and is photographed romantically, but he has no heroic presence. And when he and Holly Hunter sit in the bar at the airbase (where the heroine works, too) looking into each other's eyes longingly, there's nothing happening. (Spielberg has piled modern movie conventions right onto earlier conventions. After the tender thirties-forties scenes, the two characters go back to her place and sleep together, as they've apparently been doing all along.) Holly Hunter is a quick and direct actress, who comes at us with an excess of personality. Spielberg puts her in endless closeups, and there's not enough going on underneath. Photographed unflatteringly, she has so little color in her anxious face and she's so twisted with emotion that she begins to seem like a brown twig. A bland, glassy-faced new actor, Brad Johnson, is the shy pilot who succeeds the Dreyfuss character in the heroine's affections. Commenting on how handsome he is, she says he's like something she won in a raffle. But what you win in a raffle is a turkey.

There is one sequence in the movie that works: Hunter dances alone, thinking of her dead lover, and his ghost dances with her—of course, without touching. Almost everything else seems grandiloquent, rushed, confusing. The very first shot is of two fishermen in a boat on a lake: a plane, swooping off, comes right at them, and they dive into the water. Was the pilot a lunatic? Did the fishermen drown? Basically, it's just a visual gag. Probably Spielberg wanted to see if he could do his own version of the crop-dusting scene from NORTH BY NORTHWEST. Dreyfuss gives Hunter a white evening dress, and when she puts it on, the dirty-faced men in the airbase bar are awed by her "girl clothes"; crowds of men part for her, as if she were a miraculous vision, and the firefighters line up in the washroom to get the grease off their hands so they can take turns dancing with her, to "Smoke Gets in Your Eyes." It's a fantasy sequence in a wartime musical, except that it's rhythmless and all wrong. There are at least a battalion's worth of firefighters in the scene; we know that these men wouldn't be covered with grease when they sit drinking beer at night; and the white dress is a fright, though it hugs Hunter's breasts and can help to sell the movie. Everything seems off. One moment, Brad Johnson is the goofus who can't follow orders; the next, he's the top flying ace. There's nothing in between. (This guy is a real find: you look at him and you want to know, "Does he sing?")

Audrey Hepburn, who plays Dreyfuss's supervisory angel, delivers transcendental inanities in the cadences that have stoned audiences at the Academy Awards and other film-industry shebangs; people see her, rise to their feet, and applaud. She's become a ceremonial icon, ravishing and hollow. Where has the actress gone—the one who gave a magnificent performance in THE NUN'S STORY? There's no hint of her in this self-parody. But then, what Spielberg wants is the glowing goddess. John Goodman appears as Dreyfuss's best friend, and is turned into a fat-jolly-buddy icon. He saves himself from darlingness, but just barely.

Now that Spielberg is no longer twelve, hasn't he noticed that there's a voyeuristic queasiness in the idea of playing Cupid to the girl you loved and lost, and fixing her up with the next guy? In 1943, it was the finality of death that was being repressed. What the New Age hell is being repressed now?

Born on the Fourth of July