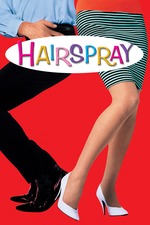 The writer-director John Waters treats the message movie as a genre to be parodied, just like the teenpic. Combining the two, he comes up with a pop dadaist musical comedy, set in Baltimore in 1962. Waters loves narrative, and he has half a dozen plots crisscrossing each other. In the middle are the spherical Mrs. Edna Turnblad (played by the male actor Divine) and her baby-blimp daughter, Tracy (Ricki Lake); they wear matching mother-and-daughter outfits. Tracy, who's the newest teenage dancer on "The Corny Collins Show," discovers that black kids aren't allowed to take part and she becomes a leader in the fight for integration. Meanwhile, Divine watches over Tracy and preens like a mother hen. There's a what-the-hell quality to Divine's acting which the film needs; it would be too close to a real teenpic without it. When Divine's Edna Turnblad is onscreen in the sleeveless dresses she's partial to, the movie has something like the lunacy of a W.C. Fields in drag. With Colleen Fitzpatrick as Tracy's bitchy rival Amber, Leslie Ann Powers as shy Penny, and Michael St. Gerard, Clayton Prince, Ruth Brown, Debbie Harry, Sonny Bono, Jerry Stiller, Shawn Thompson, Ric Ocasek, Pia Zadora, Jo Ann Havrilla, and Waters himself as a sicko psychiatrist. Released by New Line Cinema.
see Hooked.