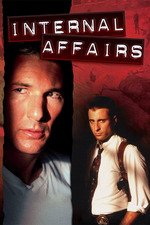 Mike Figgis's INTERNAL AFFAIRS is art-house sleaze. This label isn't meant to be totally pejorative: the picture has a creepy, rhythmic quality that sucks you in and keeps you amused. It's a sophisticated variant of other L.A. cops-and-coke-and-art-world thrillers, such as William Friedkin's TO LIVE AND DIE IN L.A. and Hal Ashby's 8 MILLION WAYS TO DIE. They were gaudy pulp, but this new one is swank pulp—smoother, better controlled, with expensive-looking couture and an ingeniously nasty subtext. The central character is a prosperous veteran cop, played by Richard Gere, who is everybody's friend. He's being investigated by two officers from the Police Department's internal-affairs division a righteous, ramrod-straight Latino, played by Andy Garcia, and his sane, honest partner, Laurie Metcalf. As the team begins to close in on what makes the Gere character so popular, he contrives to meet the Latino's beautiful blond wife (Nancy Travis). More than that, he starts talking to the husband about the beautiful blond wife. And you realize you're seeing a dirty, sexy twist on the Iago-Othello relationship.

This Iago (Gere) has an advanced case of festering machismo. A womanizer who secretly makes out with his buddies' ravishing wives and is on good terms with his own wife (Annabella Sciorra) and his ex-wives, he's all sweetness and caresses with women. He feels no sexual tensions with them; he uses them like cuddly pets. He loves children, too; he's got eight, and another on the way. His tensions are in cuckolding men, or in just makingtthem visualize him in flagrante delicto with their wives. He goads men to doubt their adequacy. This sniggering, vengeful interplay with husbands gives him more satisfaction than seducing their women. He torments the stiff-backed Othello (Garcia), boasting of his conquest, and Othello, in a jealous rage, tears off to confront his wife. When he finds her surrounded by her friends from the New Contemporary Museum, where she works, he grabs her and explodes in Spanish, whacking her. Eventually, the plot centers on a variant of Desdemona's handkerchief: a pair of panties. (They're white and so demure you feel almost certain the woman is innocent.)

Richard Gere looks better with a few years on him. His thick hair in a brush cut that's either graying or frosted, he slithers through the picture very dexterously, the smiling manipulator. You can see why women are drawn to him, and why men are taken in. He's heartlessly affable. Andy Garcia, though, gives a one-note, glaring-eyed performance. Maybe it's the humorlessness of his role that defeats him: except for his key, violent explosions (which are terrific), he's so rigid he's barely human. Laurie Metcalf makes more of an impression than the glamorous babes do. As a topnotch police officer, a lesbian who doesn't try to ingratiate herself with anybody, she shows a dry wit; it's a strong, contained performance, tough in just the right way.

Figgis, the English jazz musician and experimental-theatre man, who wrote, directed, and scored the 1988 STORMY MONDAY, worked this time from a very smart script (the first to be produced) by the American journalist and novelist Henry Bean. The movie is rather dreamy about the details of police corruption, and the construction goes wrong toward the end. (Bean and Figgis couldn't seem to think of a reason for Gere to go where they want him to be.) But this picture doesn't depend on solid construction or plot logistics. It depends on a sicko undertone and musical rhythms. Surprisingly, the score (Figgis shares the credit) is ponderous; it's generic psychopathology music—at one point, it's nothing more than a chic desiccated sound that the woman next to me suggested might be locusts. The movie represents commercialism that has gone so far into intensity for intensity's sake that it becomes a minority taste. You can't recommend INTERNAL AFFAIRS with a straight face—it casts a slimy-naughty spell. It's bad fun.