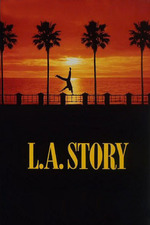 The jokes in L.A. STORY spin by as if choreographed by summer breezes. Carl Reiner has been heard to say of Steve Martin, "There's a mysterious man in there who comes out when he writes his own scripts. " On the evidence of L.A. STORY, which Martin wrote and stars in, it's a mysteriously happy man. Maybe Martin couldn't have written this auto-biographical fantasy if Woody Allen hadn't made ANNIE HALL and MANHATTAN, but what he loves about L.A. is what Allen rejected it for: its pleasure-loving, materialistic irresponsibleness. Allen sees moral lightness as immorality, as evil; he didn't ever seem to get the humor of L.A.

Martin's movie is a take on Annie Hall that turns it inside out. His attitudes are close to the ones that Paul Mazursky developed, starting with the script of I LOVE YOU, ALICE B. TOKLAS! and running through his whole series of L.A. movies: BOB & CAROL & TEA & ALICE, ALEX IN WONDERLAND, BLUME IN LOVE, and DOWN AND OUT IN BEVERLY HILLS. Mazursky was a New Yorker, but he fell in love with the loop-the-loopiness of L.A. —he didn't fight the pleasure or crab at it. For Martin, who grew up in Southern California, superficiality is the norm. L.A. STORY is totally inconsequential, and he accepts that—it doesn't bother him. He isn't afraid of silliness. And that's what makes the movie such a light-headed joyride for an audience.

As Harris K. Telemacher, a clowning TV weatherman, Martin is split between his wonder-struck obsession with a British journalist, played by Victoria Tennant (in an Annie Hall hat), and the carefree high of sex without love, represented by a bouncy nymph played by Sarah Jessica Parker. That's all there is, really—that and the jokes and the atmosphere and a batch of sharp performers (Rick Moranis uncredited, Marilu Henner as a tough dame with a cold stare, Susan Forristal as Martin's pal, M. C. Shan as a waiter-rapper, and Richard E. Grant, Kevin Pollak, and Patrick Stewart, among others). What keeps most of it airy and tingling is the artfulness of the director, the English TV ace Mick Jackson (who's best known here for his mini-series A Very British Coup, starring Ray McAnally), and the talents of the cinematographer, Andrew Dunn; the editor, Richard A. Harris; and Peter Melnick, who provided a funny, lilting score.

Sometimes the jokes aren't fresh: there's a particularly long, dull one about a painting. And things don't move fast enough toward the end. I think that's because Martin, an old-fashioned romantic at heart, doesn't see that Sarah Jessica Parker, twirling around him, her long, curly hair like eiderdown, is the natural heroine of an L.A. movie. She's the spirit of L.A.: she keeps saying yes.

The Earrings of Madame de...