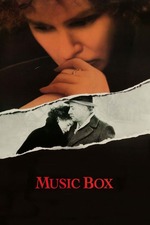 A few years ago, the TV news was dominated by images of the big, square head of John Demjanjuk, the Ukrainian immigrant who, after decades as a Cleveland autoworker, was accused of being Ivan the Terrible of Treblinka. We watched as aged victims swore that Demjanjuk was their torturer, and we listened as he protested that it was all a case of mistaken identity, with papers rigged against him by the Soviet bloc. The new Costa-Gavras movie, MUSIC BOX, presents us with a fictional case based on Demjanjuk, and it has that same kind of fascination. Can the witnesses who testify against the retired Chicago steelworker Mike Laszlo (Armin Mueller-Stahl) be mistaken, or was he, in his youth, the monster they describe? Jessica Lange plays Laszlo's daughter, Ann Talbot, who is a lawyer and is defending him at a hearing that could cost him his citizenship; if he loses, he'll be sent back to Hungary, where the Communist government is waiting to try him for war crimes. Ann believes that the case was instigated because her father has been active in demonstrations against Hungarian dignitaries who have come on visits to the United States, and she may be right about that. But is there another man hidden inside the kindly father she has always known?

The emotional core of the movie is that during the trial, as the Second World War victims give their accounts of what the sadistic young police officer did to them, Ann begins to lose faith in her father's innocence. She's a skilled attorney, and she presses on, but everything she has believed about the upright, honorable widower who raised her shifts and crumbles.

When the cast and the script are right for Costa-Gavras—as they are here—he has the knack of giving tempo and urgency to courtroom scenes. Others try for it; he really does it. This melodrama has the pull of a thriller. Shot in and around Chicago and in Budapest, it has no flashbacks and none of the usual shock apparatus of movies about wartime atrocities: the impact of MUSIC BOX comes from the testimony (and behavior) of the elderly witnesses. We take in what they're saying, and we watch Ann taking it in. Costa· Gavras provides a low·key, controlled atmosphere, and Jessica Lange fills it with passion that's begging for release. In a recent interview, she was quoted as saying, "I love the sound of the cello." That's her emotional sound in this role: intelligent, searching, womanly.

Everyone I know wishes we could see Lange in more fluffy-blonde comedy roles. (We long for another TOOTSIE.) But she has been developing a deeper range. Her character here doesn't have the dimensions of her Frances Farmer, but within the limits of a melodrama she verges on the astounding. Lange is one of those star performers—Diane Keaton is another—whose characters don't necessarily come on as stars. Ann Talbot is a brunette in plain business suits, and her being slightly worn makes her beauty more accessible. Her curly hair suggests a bad perm; it sticks out in funny ways and has no shine, no highlights. (It's as if there were no hairdresser on the set.) Ann is a busy woman with other things to think about, and we get to see the workings of her mind. The competitive smartness of the opposing lawyers is always part of the drama of good courtroom movies, and Ann, working against a rather surly government attorney (Frederic Forrest), springs traps with crisp efficiency.

Costa-Gavras is a remarkably lucid storyteller. He doesn't dawdle, and you have to pay close attention to the courtroom evidence: things are planted very fast, and if you're not on your toes you'll lose out when the payoffs come. There's an excitement in this tightly constructed narrative: it builds, and the complications draw it even tighter. But you're conscious of how the film is setting you up; the screenwriter, Joe Eszterhas (who's the son of Hungarian refugees), lays things out almost too professionally. His commercialism can be like cold water in the face, after you've watched a procession of wonderfully varied character actors putting a lifetime of training into a few minutes of testimony. (Two of the most moving are Sol Frieder, as Istvan Boday, a bald old man with a goatee, who describes the murder of his family on the banks of the Danube, and Elzbieta Czyzewska, as a precise, closed-faced woman who describes how she was raped.) Eszterhas uses historical crimes very astutely, but he forces them into an entertainment package alongside old-Hollywood devices. The final plot developments (after the music box makes its appearance) are overextended, and they feel fake. The focus of the material goes wrong: what we're watching is suddenly too much about Ann's suffering—movie-star suffering.

Costa-Gavras seems to have little pockets of innocence about how Americans live. There is nothing here as far out of kilter as a lot of the stuff in BETRAYED was, but a weirdly misconceived black character, Georgine (Cheryl Lynn Bruce), who's some sort of crack legal investigator, floats around and seems to function as Ann's all-purpose aide. (In one scene, she turns up in African robes; she out-dresses her boss.) But Costa-Gavras has his wits about him in the key relationships. The German actor Armin Mueller-Stahl keeps the father from becoming too easy for the audience to decipher: he's a formal, Old World father—you never feel you know him. (So you understand his daughter's not knowing him.) And the film balances the daughter's smart toughness in her cross-examinations with the father's handsome, cold-blue-eyed righteousness. I expected Costa-Gavras and Eszterhas to show us some connection between the father's mental dexterity and the daughter's choice of career, but maybe we were meant to pick that up for ourselves. What counts is the Old World, New World texture that Jessica Lange brings to toughness. Her beautiful throatiness counts. She has the will and the technique to take a role that's really no more than a function of melodrama and turn this movie into a cello concerto.