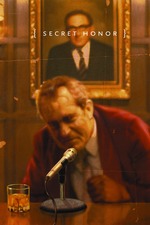 Robert Altman has more sheer stubborn effrontery than any other great American director, as he proved in the string of recklessly original movies he made in the first half of the seventies: M*A*S*H (1970), MCCABE & MRS. MILLER (1971), THE LONG GOODBYE (1973), THIEVES LIKE US (1974), CALIFORNIA SPLIT (1974), and NASHVILLE (1975). He has always been erratic, and he has an equally long list of bummers and valiant efforts that failed, but when he's working in top form there's nobody who can touch him. They can't even get near him. And in the eighties, working on a smaller scale, mostly with backing from cable television, he's still a terror. In 1982, he turned the most unlikely material—the sappy theatre piece COME BACK TO THE 5 & DIME JIMMY DEAN, JIMMY DEAN—into an ethereal, balletic film that's unlike anything else he has ever done. (In lyricism, it rivals MCCABE and THIEVES LIKE US.) His version of STREAMERS in 1983 was all rant, and despite the visual beauty he lavished on Marsha Norman's hour-long THE LAUNDROMAT, which was shown on HBO in April, the awful play defeated him and the hardworking performers, Amy Madigan and Carol Burnett. But the Altman film that has already played in much of the country and has only now opened in New York City, his 1984 version of SECRET HONOR—a one-character, one-room-set play—is a small, weird triumph. Robert Altman, the master of large ensembles, loose action, and overlapping voices, demonstrates that with the help of a hot cinematographer (Pierre Mignot, the Canadian who shot JIMMY DEAN, JIMMY DEAN) he can make film fireworks out of next to nothing. SECRET HONOR was filmed, with student assistants, in a residence hall at the University of Michigan, where Altman, who financed it himself, has been a visiting professor.

The actor is Philip Baker Hall, playing Richard Milhous Nixon, and the room is Nixon's wood-panelled study, where for ninety minutes Hall's Nixon paces the floor and raves and reminisces, like a caged Richard III. The play—a one-man docudrama by Donald Freed and Arnold M. Stone—is this semi-fictional Nixon's wild rumination on his life. It's a last testament, a mixture of confession and self-exoneration, delivered to a tape recorder by a man who toys with the idea of ending his life—he takes a revolver out of a fine case and puts it on top of his desk. Hall's Nixon speaks rapidly, and more and more incoherently. Words spew out of him, he stammers, sentences aren't finished, digressions interrupt digressions, and, as he becomes more and more self-justifying, conflicting half thoughts fight with each other in the air. And, constantly dissatisfied with his errant remarks, he keeps instructing his secretary to erase "all this crap." The material, much of it familiar from various memoirs, from journalists' accounts, and the Watergate tapes and transcripts, is like a nightmare mythology. He rails against Kissinger and Ike and the Kennedys, against Hiss and against Castro, against the Eastern Establishment, and, most of all, against the Committee of 100—the powerful men who, in this film's view, were his bosses. And he swigs down Chivas Regal. The movie has a heightened quality, as if all the tumult of Nixon's last year in the White House, his resignation and his pardon—all the news that we devoured from magazines and the papers and TV, and the constant stream of revelations—were compacted into this frazzled monologue. It's a seizure, a crackup, and the near-pornographic excess of the display is transfixing.

While Hall's Nixon flings himself about the room, glaring at the portraits on the walls—George Washington over the fireplace, Woodrow Wilson, Lincoln, the stern, baleful Kissinger—and howling out his resentments, Altman keeps the camera dancing. The visual pyrotechnics and the cutting have a basic purpose: to sustain the illusion of an unbroken harangue by a distraught—and gradually drunken—man. A few shifts and edits break the flow, but Altman picks it up so fast that they barely have time to register; the hypnotic spell isn't broken. And, of course, Altman's visual sleight of hand does more for SECRET HONOR than just make it appear seamless. He holds Nixon's unfinished thoughts and their overtones and associations in suspension. This film is as layered as any of Altman's seventies movies, but what he did with voices in CALIFORNIA SPLIT and with characters and plot threads in NASHVILLE he's doing with elements that you don't see or hear, that you can only intuit. He's juggling with thistledown; we don't know how he does it, and neither does he. (If he did, he wouldn't have so many flops.)

A bank of four TV security monitors gives us a roomful of Nixons, and the movie is always in motion; it's recording the turmoil inside this man, whose post-Watergate plight is obscenely tragic, and obscenely funny, too, because he blames it all on the big guys, who made him feel that he was playing out of his league. His self-pitying bitterness, his feeling of being used, and the anger that's right under the surface are grotesquely vivid; they're a hyperbolic form of emotions that seem common among struggling, defeated lower-middle-class men, and they bring him pitiably, repellently close. He's a lot like John Schuck's Chicamaw in THIEVES LIKE US—the robber whose attitude toward the world was screw or be screwed, and who wound up alone on a country road, yelling. Nixon poses in front of the four TV screens and addresses them as if he were speaking to a court of world opinion. He waves the gun about, then gets out his family Bible and rages at Kissinger for revealing that he knelt and prayed on the rug that was a present from the Shah. He clutches his sainted mother's photograph and barks ''arf" for her, calling himself her little dog. He preens, holding his arms up in front of a glass-panelled window, and his reflection is divided into sections; he's splintering right before our eyes. We watch Nixon rehearsing to play Nixon; he's his own creation, and he despises it and despises the world that he believes forced him into being what he is. He keeps looking for himself in the TV screens—framing himself—until at the end there's nothing to frame.

It's an acting feat by a man who probably isn't a great actor. I'm not sure what is missing, but there's a grayness about Hall, a lack of personality; he isn't enough of a force on his own—he isn't enough of a star—to replace Nixon in the mind's eye. The smooth-voiced Hall, who originated the role on the stage, doesn't create the character; he steps into Nixon's skin—there's an element of impersonation in the performance. At times, his face and hunched shoulders suggest Ed Sullivan, and he suggests other people, too (José Ferrer, Sinatra); he's slightly anonymous. Yet it's partly Hall's not being a great actor that makes the performance work so brilliantly. Hall draws on his lack of a star presence and on an actor's fears of his own mediocrity in a way that seems to parallel Nixon's feelings. Though he doesn't closely resemble Nixon, he's got the Nixon twitches down pat, and he gets inside him with so much historical accuracy that it's as if we were watching the actual Nixon in the wildest scenes that others wrote about, and as if we were seeing the man we heard on the tapes. At the same time, there's enough of a stunt about the performance to distance us, so that we can respond more freely than we could if footage of the actual Nixon were cut to make him look rabid or viper-eyed.

The least convincing part of the material is Freed and Stone's notion of having their Nixon plead that he has "secret honor"—that is, that he deliberately "orchestrated" the Watergate mess rather than give in to the Committee of 100, who offered him a third term if he'd prolong the war in Vietnam (so the huge kickbacks on American aid to Vietnam would keep coming). But so much of the craziness of what the film's Nixon says rings little bells in the memory that this leap in the conspiratorial dark doesn't do much damage. It may even add a hallucinatory streak to the burlesque: Nixon's big revelation is a phony. It certainly doesn't hurt Hall's performance, or Altman's, either. He directs like a man on a roll, who can do no wrong.

There's a virtuoso naughtiness about the sureness of Altman's touch here. Morally, there's probably no way to justify this movie. Unlike Richard III, Richard Milhous Nixon hasn't been dead for centuries. And I think our knowledge that he's still around—that he was the President just a few years ago, and that Ronald Reagan is actually the President now—is part of what gives the movie its kick. I feel a temptation to try to justify it—and it would be possible to say that it isn't an act of political revenge, that its portrait of Nixon transcends revenge by making him creepily sympathetic. But it's only if you accept Freed and Stone's view that he was just the hireling and stooge of the Committee (which means accepting the playwrights' whole paranoid outlook on American capitalism as a monolithic, controlled system, and on the Presidency as a post for an indentured servant) that the character we see is a victim, an Everyman, and sympathetic. The film's Nixon is practically a werewolf; he's horrifying—an intellectual slob. And that, I'll admit, is what held me. The movie has the power of the most raucous, mean, and dirty caricatures of our thirty-seventh President, and those caricatures are alive here. Maybe it's because Nixon in office began to look-to some of us—like some crazy Kabuki figure that no exaggeration seems too vile.

It's only dramatically (and aesthetically) that I can justify this gonzo psychodocudrama. It has a grandeur to it because the trapped, rancorous man it shows us made a raw spectacle of his Presidency.

Once Upon a Time in America