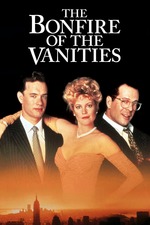 The Bonfire of the Vanities 1990

“The Bonfire of the Vanities”

Brian De Palma walked right off a cliff when he made his version of the Tom Wolfe novel The Bonfire of the Vanities. Other movies about the political circus surrounding a criminal trial (movies such as HIS GIRL FRIDAY and ROXIE HART) encouraged us to sympathize with the innocent defendant. In the Wolfe novel—a satirical expose of how democracy works in New York in the eighties—the rich, seemingly se cure Wasp Sherman McCoy is caught in the justice system. He and his mistress, in his Mercedes, hit a young black man; as a result, pressure groups, politicians, and newspapermen are out to get him, and they break him. But if the movie allowed us to feel a natural empathy with McCoy it would violate Wolfe's deliberately heartless, mocking tone. So De Palma tries for a rollicking impersonality. Intending to use the big city as a flamboyant comedy set, he comes up with an expressionist stylization of the Preston Sturges conniption-fit comedies: exaggeratedly large rooms, high and low perspectives, and people looming in the shots. At times, the décor suggests the super-artificial scene designs in A CLOCKWORK ORANGE. It's ingenious; there's clever thinking behind it. And it's a fizzle. The movie has a shrill sprightliness; it's like a sci-fi version of a loud, over-bright screwball comedy.

BONFIRE has a throwaway quality: bizarre, glittering things go by so quickly they don't take time to salute themselves. At the beginning, there's a splendiferous view looking down on Manhattan from the wing of a gargoyle on the Chrysler Building. And then, in a showpiece tracking, Steadicam shot that goes on for five minutes, elevator doors open and close at the instant required; the precision is the gag, but it misses being really funny because it's too precise. It's ahead of us. All through the movie, De Palma's timing is off, as if his instincts had gone on holiday. You feel a kind of fanaticism in his directing: he's planned everything—it's an exercise in wrong-headed style.

The picture grates on your nerves: you sit there listening to Melanie Griffith's metallic whine and you watch Bruce Willis fail at the simple task of playing a comic drunk. These are talented people—what's happened to them? Just about everybody in the cast seems keyed up too high. Tom Hanks (as Sherman McCoy), Morgan Freeman, F. Murray Abraham, Kim Cattrall, John Hancock—they all seem caught in a frenzied competition to overdo everything.

Hanks has his moments. When McCoy, at his brokerage firm, stands preening, with his chest flung out, he looks fit and invulnerable—a newly hatched fool. After his arrest, his face is frozen; he smiles inappropriately—a sickly, terrified smile. But the picture slights his being put behind bars and how he's affected; the scenes are fast and hysterical, without momentum. So the central episode of the story doesn't sink in, and there's no satirical fun in McCoy's terror. We don't really get to see that all the elements in the city which he, in his smugness, has ignored—the full range of people on the make—are using him to advance their careers.

The movie has two points of view, and they don't jibe. In the final courtroom scene, Freeman, as the judge, makes a speech that shames the political operators and agitators, and brings them to their senses. The movie descends to Capraesque sincerity at this point, so we have to assume that it's the message we're to take home. But Willis, as the tabloid journalist who exploits McCoy's predicament, is the cynical narrator, and he's the winner—he profiteers on a profiteering decade. Literary prizes are lavished on his book about the case, and we're supposed to find this swine's triumph ironic and hilarious. A subway scene where he gets to know McCoy and recognizes what he's done to him has no follow-through; effective scenes with Richard Libertini, Robert Stephens, Andre Gregory, and Alan King don't add up to enough. Whatever one's feelings about the Wolfe novel (I disliked it), it works. Michael Cristofer's thin script doesn't; it's as if he had been hired to make the worst adaptation that could be made. And the score, by Dave Grusin, never clues you in; totally distanced from the action, it's in some tinkling world of its own.

De Palma, who showed a genius for sophomoric comedy in his youth, had already made his BONFIRE OF THE VANITIES. It was the daring race-relations jamboree HI, MOM! (1970). And he made a slapstick rock-musical BONFIRE called PHANTOM OF THE PARADISE (1974). You see that crazy-house bravura here in the swirling overhead shots and DR. STRANGELOVE, TOUCH OF EVIL camerawork, in the love of visual detail, in the intricate patterning of tiles and bricks. But the story is overwhelmed by a style that's meant to be dizzyingly aggressive. What's missing is the shock and offensiveness that could give the commotion some point. The picture keeps pulling back from the true outrageousness of borderline racist humor—the only thing that could save it. That was what gave the novel its hostile charge. Without that, not only does the movie miss the target, you don't know what the target is.