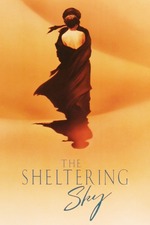 It used to be said of the composer-writer Paul Bowles and his playwright wife, Jane, that he was afraid of nothing and she was afraid of everything. That was before he published his first novel, "The Sheltering Sky," which seems an elaboration of the remark. The 1949 book was his semiautobiographical account of their marriage—an account that fascinated readers by its Olympian closeted tone. Under the novel's vaporousness is a pop theme: what happens to a modern, dissatisfied woman—a New York artist-intellectual—if she's in the Sahara, her husband dies, and she's enslaved in a harem? She loves it and hates it; she goes mad. But this is not simply a male writer's version of a woman's harem-whore fantasy: the wife, Kit, seems to be fulfilling the nature and desires that the husband, Port, cannot fulfill for himself.

Bowles is so private he doesn't let you in on much. Reading the book, you can't tell who is who sexually; stonewalling is Bowles' literary art. But the novel attracted directors the way Malcolm Lowry's "Under the Volcano" did. Movie people talked about it with awe (Robert Aldrich, Nicolas Roeg, and Mick Jagger were among those who thought of filming it), and when Bernardo Bertolucci got caught up in it he must have been awed, too. His new THE SHELTERING SKY filters out the pop element that gives the book its bit of kicky horror.

Tall, blond Port (John Malkovich), powerfully built, has a creamy voice, a soft pout, and slightly weaving hips. It's the postwar era, and Kit (Debra Winger), his wife of ten years, wears her dark curly hair cropped but piled high on her forehead—she looks like a fashionable illustrator's idea of a spunky lesbian. They're so close a couple they're almost a single person, yet they're unhappy, petulant, snagged. They're one person, but they're also isolated from each other. Even on the rare occasions when they have sex together, there's no passion in it. Most days, they can only quarrel. Port feels that they'll never be in synch, that he wants them to reach the country of the unconscious but Kit holds back. So they go on journeys from the decaying known to the scary unknown with a third person along as a buffer. On the 1947 trip that the film covers, it's rich, handsome, dull Tunner (Campbell Scott). His attentions to Kit give some sexual edge and jealousy to the married pair, and his presence binds them closer; he doesn't have their style, and they treat him as a clod. They're a nasty, brittle pair, strangling in their style.

Crossing boundless landscapes, the three go from Oran, in Algeria, to remote villages in the Sahara, because Port believes in testing himself; he likes rigors and danger, likes the idea of fearlessness. (It's his special arrogance; it's part of his narcissism to see himself as an adventurer.) He takes long night walks in unlighted alleyways and (rather risibly) lets a pimp steer him to a thieving Arab girl in a tent. Kit, hugging her hotel rooms and looking at her luggage for reassurance, lets herself be seduced by Tunner. Sneakily, Port contrives to get rid of him, and the couple, alone, go farther into the boredom of the desert. We wait and wait for all this trekking by train and car and bus to start paying off, but what Bertolucci and his cinematographer, Vittorio Storaro, give us is flies, squalor, and dunes. (THE SHERLTERING SKY won't do a lot for North African tourism.) Eventually, with Kit watching over him but helpless to save him, Port succumbs to typhoid.

In Bowles' account (as I make it out), Port dies giving birth to Kit's sexuality, and she becomes him. Fearlessly, fatalistically, she goes into the desert at night, joins a caravan of merchants, and is raped repeatedly by a crude, feudal old Tuareg tribesman and a younger Tuareg, who turns her into his chattel. Bowles' description appears to be his own fantasy of what the hypercivilized Kit-and Port-really want. Kit's (Port's) madness is a sexual version of the Heart of Darkness. The novel is a horror fantasy, like Bowles' most famous short story, the 1945 "A Distant Episode," about a French professor of linguistics who comes to North Africa to study desert dialects: nomads cut out his tongue, dress him in tin cans, and make him dance like a clown. In that story (which prefigures the novel), the professor goes mad—he becomes the nomads' clown. Bowles' "The Sheltering Sky" is high-toned sensationalism; by the end, it has turned into pulp exotica—the alienated intellectual's version of Valentino's THE SHEIK.

In the movie, all this is muffled. Bertolucci doesn't make any big alterations, but the attenuated story becomes even more attenuated, and after Port's death there's no suspense, no drama. When Kit goes farther into the desert, you may think the movie is about changing time zones, and, essentially, you're right. The older rapist is left out, and we don't feel the fullness of Kit's sexual release, or the fullness of her debasement when she's one of the women in the seraglio. She's never raped: the young Tuareg is a tender lover. What we get is too affectless to be a sex fantasy; affectlessness itself is the point.

Would I like the movie better if Bertolucci had put in the novel's cheap thrills? You bet I would. I might have laughed at the trashiness, but that's better than feeling apathetic. I don't respect his choice of this material, but, having chosen it, he might have tried to get at the high-risk desire to be overpowered, instead of filling the closet with sand and art. The whole thing has the impressively decadent look of an Armani ad. Storaro is Storaro. His cinematography is lovely but unsurprising—in truth, a little stale. (The graceful camels might be the same ones who posed for him in ISHTAR.)

Port isn't simply a repressed homosexual; he's also a repressed heterosexual. He's a furtive, skunky aesthete, a man of no generous impulses—our worst self—image of white civilization. Bertolucci and his co-scriptwriter, Mark Peploe, have given Port a gloating moment when, after his session with the Arab prostitute, he holds up the wallet that she thinks she has effectively made off with. He has been contentedly nuzzling her ripe melon breasts, but he has to show her he has outmaneuvered her, even though that gives her time to make the shrill, trilling cry that alerts her protectors. (Perhaps Port wants to be chased.) The ingenious Malkovich brings new character textures to the screen: Port is full of smug self-hatred.

Winger takes on a definite resemblance to the iconic photographs of Jane Bowles, but what's the point when the makeup and hairdo aren't attractive on her? (Most people will just think she's losing her looks.) Winger speaks as if she were reading; she never seems to get the hang of the character. (Maybe nobody could, or maybe it would take someone like the young Katharine Hepburn.) Except for a bit of derisive mimicry of Tunner, Winger seems to have nothing to play until Port is feverish and dying. Then she can show hysterical anxiety; it's as if she suddenly dipped into surplus emotions from earlier roles.

At the beginning of the picture, we see that Kit has packed "Nightwood" in her bag. That's about a woman who becomes a dog; here she becomes a zombie. When Kit joins the caravan, rides a camel, and is on her way to becoming a contented Jove slave, we gauge how long she's en route by the phases of the moon. Her movement into the desert night seems to be intended as a rebirth. (By the time the caravan reaches its destination, she looks like a winsome, dark-skinned Arab boy. Or is it Port who has come out as a homosexual?) The moon phases in the deep-blue desert sky are charmingly cartoonish, but probably the mocking tone isn't intended. (It may be something that happens when Bertolucci gets consciously poetic, as in his 1979 LUNA.) Once Kit is part of the caravan, we're meant to feel that there has been a shift in her psyche. Bertolucci signals us that she has moved away from the verbal, from definitions and categories, by giving us a long, silent passage (though he keeps the trance music—the drums and flutes—going). She has achieved Port's goal: the country of the unconscious.

The picture never quickens your response to anything. Rather, it's a New Age way of viewing the desert and its inhabitants as primal. Rolling benignly on their camels' backs, the tribesmen are themselves New Agey. We're led to believe that they're not neurotic, like Port, or dull, like Tunner. (In this view, the nomads don't have to strive to be unconscious; it's their heritage.) The seventy-nine-year-old Bowles has been enlisted to play some sort of presiding expatriate sage; he's like the zombie master when he looks into Kit's gray-blue eyes and asks her, "Are you lost?" As I interpret the movie, the wandering Kit, thrown out of the seraglio, may be lost but she isn't mad: having been transmuted, she's drawn to anonymity and impersonality. You're left with the impression that she'd rather be a nameless whore in some Casbah than return to the New York heebie-jeebies.

Bertolucci thought about the Paul Bowles novel so much it disintegrated. If he had filmed "A Distant Episode," he might have presented the insane professor of linguistics (who remained in the desert) as having made a sound political choice. I'm pushing it, of course; I'm trying to indicate that the sensibilities of Bowles and Bertolucci simply don't fit together.

Just as Bertolucci and his co-writer Peploe suggested in THE LAST EMPEROR that forced reeducation—Communist brainwashing—had saved Pu Yi's soul, so now they propose that Kit's blanking out is a form of cultural cleansing, and that her being used for nothing but sex (like a trained pet: a dog?) is sexual liberation. I hope I'm wildly overinterpreting this movie, because if I'm not, Bertolucci has become a caricature of the Western intellectuals who reject Western values. And at the same time that he's telling us how decadent we are he's making this overscaled, sensuous, sumptuous fantasy that looks as if it's about Lawrence of Arabia's sex life.