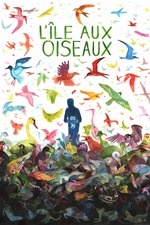 The birds weren't able to adapt to a world that was no longer made for them.

Perhaps the greatest compliment I can give Bird Island is that it has a very unique look. From what I can tell, this is a documentary. Whatever you are seeing on-screen is not staged, instead capturing these people you are seeing actually doing their jobs. Despite that, the film looks and feels like a standard dramatic narrative. It looks cinematic. The work being done on-screen is also undoubtedly worthwhile, if not a little somber when we see the instances of bird being injured that don't work out well. The unfortunate thing is that beyond it all looking nice, and a bunch of the birds being adorable, Bird Island did not really connect with me at all. Even at a runtime that barely passes sixty minutes, its pacing is almost unbearably slow, which I think is part of the point, but it just doesn't work out in the film's favor. The voice-over also often felt unnecessary, trying to add depth to events that did not need the extra information. Can't really personally recommend it, yet maybe its more meditative nature and exploration of birds could intrigue others.