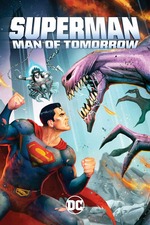 Look! Up in the sky!

It's back to college classes (online seemingly for the whole semester though) starting tomorrow, so I wanted to go out with a bang. A brand spanking new Superman movie being released today seemed to be the perfect way to end my summer. Since the film's announcement and especially since the first images and trailer were released, I've been waiting eagerly for this. I cannot pretend to be unbiased with this movie or this character as a whole. Unless you really go out of your way to mess it all up or just be incredibly boring, if the Man of Steel is at the forefront of a movie, I'm going to be all in. Luck is on my side tonight, because I liked this a lot. Superman: Man of Tomorrow borrows from other tellings of Clark's origin story, most notably being Max Landis' American Alien, but as it keeps moving along, it develops its own sense of style and heart. That's one of the integral components of Superman as a character: Heart. And to me, this movie captures that essential aspect of Supes well. In the first scene of the film, a young Clark watches an old alien movie with his friend Pete Ross. As the alien is shown to be a villain and Pete verbalizes his disdain with the creature, Clark breaks down into tears. (This moment made me emotional myself.) As is reflected on in a later scene, it is impossible for Clark to wholly reject that he is different. He is strong in a way no one, at least not on Earth, exactly is. Therefore, he has a choice to make. Does he take his responsibility head-on, or does his keep his gaze away from the problems of the world? It's his choice, but he has to make it, and own up to the consequences of that choice. Being the optimist and empathetic guy he is, you can figure out which one he goes for. A very strong voice cast, animation that I mostly really liked except for the occasionally lazy effect, and a well-written script for its runtime and format. I do have some issues with gaps in logic and lacking of better character development that comes off as the result of being a shorter and VOD feature, which is why I can't give it a higher rating than I already am. However, where it has its faults, I would also more often than not find quite a bit to enjoy and even admire about this film. If you have been let down by some of the more modern live-action renditions of Clark's adventures, wishing for something that's bright where it needs to be, intense where it also needs to be, and all around a legitimately well-told superhero story, this should be more than worth a visit. Fraggin' good.