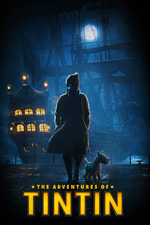 There's something you need to know about failure, Tintin. You can never let it defeat you.

A PG adventure film with guns, booze, and blood. Hey, it really is a throwback feature from a classic filmmaker. Equal parts Uncharted and Indiana Jones, I believe Spielberg is in the camp of thinking video games aren't art, but now I'm really hankering for the timeline where he directed the Uncharted film. (There's a chase in this, a good amount of which is stylized to look like one take, where you could so easily switch Tintin and Haddock with Nathan and Sully, and it would work perfectly.) Rather stunned by how great this looks ten years after its initial release. While not my favorite film done in this style, this has to be the best one of these motion capture films has ever looked, right? It strikes this balance between realism and cartoonishly exaggerated human features perfectly, no real awkward moment of animation to be spotted. So yeah, this movie rules. Close to giving it four stars, might do so on an eventual rewatch, but even now, think this is a ton of fun. Cheeky writing and also a real sense of adventure that's hard to find being done in modern film by anyone, and of course it's a delight to get something done as an effort by legends collaborating like Spielberg, Peter Jackson, and Edgar Wright. You feel the artistic touches of all of them and even the cast with their unique energies bestowed onto their characters. Bell and Serkis have strong chemistry, and since it's openly known that I love me some dogs, of course I thought Snowie was just the cutest little fella with all of the pep of the world. The locales are diverse and the action is about as clean and sweeping as Spielberg has ever attempted, it's a neat time, an impressive feat of animation and technology, and I really want that planned trilogy to end up happening. If it still looks this good a decade later, imagine what a sequel could look like. In general, I'm just in dire need of a lot more ramshackle globe-trotting adventure films featuring a precocious protagonist, an alcoholic partner, and an animal sidekick to seal the deal.