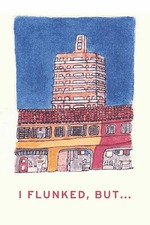 This one is a charming contemplative comedy about college life, mirroring the life after graduation and the life of the failed. I really love Ozu's playful composition and unison movements from this group of best friend. I also learned a little about his famous Tatami Shots yesterday and I realized there are several hints of his early version of that style here. Walking cheerfully in line, with their arms tied to each other. The iconic dance of goodbye. As if Ozu always wanted them to dance when they're together. Oh, and that cheating sequence during exam is one of the biggest highlight.

I flunked, but... there are many unspeakable things that follow that sentence, yet the following three dots really depicted its silent complexity. It took courage to face the fact and admit defeat, and it took twice the courage to start again. But there's always enough amount of contemplative moment; some with too much melancholy in it, another with a little too close to the verge of breaking down.

A little boy who don't know a lot about anything asked, "What does failed mean?" to a group of best friend who just graduated from college, and in unison they bowed down their heads with sudden contemplation of their one friend who flunked at the last exam and didn't graduate. Several scenes later that one friend who flunked asked the little boy, "Why do you want to grow up?" as if he asked him with something like "You don't want to grow up like me, right?" But the little boy answered innocently with "I want to go to the university and to be like you. Yes, I want to be flunked." Beat.

Watching this in complete silence with no music really hit me. The melancholic beat sounded a little too loud and I couldn't hide from it. When I finished chuckling, Ozu gave some difficult questions to contemplate to. Made me lost in my own thoughts in some moment trying to find answers. Yet Ozu kept asking me another difficult question. Again and again without any hint of answers. What does failed mean anyway?