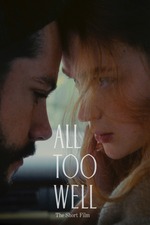 nothing worse than an upper-class white woman making something that screams “i have problems, i’m just like you!” (and i say this as her fans are actively inflating this “short” on letterboxd, completely suppressing anything diverse + meaningful)

before you get mad, hear me out:

the short undeniably looks pretty, but feels vapid. dylan and sadie are fantastic actors on their own but they don’t really have chemistry here so it’s pretty jarring. i’ve never been a fan of taylor’s music, so for me, the best parts of this are when it’s not being used as a backdrop for the scenes and dylan/sadie are actually able to speak. even then though, the dialogue doesn’t feel natural in the slightest; you get completely taken out of any scene because you remember that they’re simply just actors acting. again, this is no knock to their talents, because i do like them both, it’s more so a writing issue. you can only do so much with what you’re given (writing + direction-wise).

it’s also a very weird stylistic choice to have title cards… it’s as if they didn’t see the audience smart enough to figure out each stage of the relationship on their own or just didn’t feel confident enough in their own direction. i’d love to know who chose that indie style font too because it’s definitely not great for what appears to be such a high budget production!

i’m not gonna talk about the irl relationship between taylor swift and jake gyllenhaal because i have no clue what it was like, however, the age gap is certainly weird & gross! that much cannot be understated.

final thoughts: this feels like nothing more than a glorified music video and i’m not getting anywhere near the same reaction that fans of hers are getting. there are far better and shorter music videos out there that aren’t being marketed as a “short film” !!!!!!!!

(only rating this to balance out the undeserved five-star reviews, realistically deserves maybe a two or something idk)