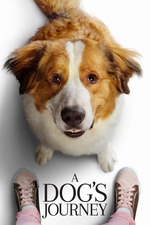 Reconnections made through reincarnation, with grasps at true understanding being the main theme of the film. It is a silly little idea, where one soul travels through several dogs in the life of one woman, one originally kept by her grandparents. The sole job of the dog, in response to a promised asked for by the grandfather, is to protect the woman however close or far they might be.

All I ask is for some competency in its filmmaking, conviction in its acting, and sincerity to its final point. The film does fine on all three points, meaning its absurdity and its ridiculous logic feels like details rather than complete ends to this film's merits. It all feels like some convoluted explanation for its own resolution, one that isn't brought about by logic but by sheer will. It does feel a bit foolish in the moment. But if all of that leads to Dennis Quaid and his old dog in a field after death, forever... the point of it at least feels well intended. And it is a nice little idea, barring the silliness that surrounds it. This is helped by Quaid's surprisingly earnest performance, as well as some other solid performers here who give individual scenes some legitimacy. Betty Gilpin is great (despite the sometimes one-dimensional writing), and the scene where she drunkenly admits to spending her daughters inheritance money on her house and alcohol is both bizarrely dark and well done on her part. Kathryn Prescott is fine, Marg Helgenberger is fine, Henry Lau is fine, the kid actors do alright, even Josh Gad is allowed to deliver some innocent seriousness that doesn't feel too cloying or obnoxious.

That being said, the film's sense of humor often doesn't do it many favors. And for how ambitious the film can be with its reincarnations, like how they continue and how they end, or even in its more bleak admittance of death again and again and again, it doesn't always feel well thought out, and it can be pretty childish in its ultimate goal of dog worship. It isn't trying too hard in any lane beyond that, and it does often show. Though I will admit, smaller details and a willingness to go dark when needed are appreciated, even when they stumble in the darkness of uncertainty when even trying these things out at all.

I don't hate it. In fact, I'd say it works in some bizarre, awkward way. Not that I would pay to see it again, but that sincerity is certainly something I didn't see in many of the films that use the same strategy of "life, as seen and felt through a dog." It has heart, and it really does commit where it counts. Is it my thing? Not really. But I see some love here, whether that be from its director, its several screenwriters, its actors, whoever. Somebody cared to make this better than it should be, even if its ceiling could never really be that high regardless.

(Also the soundtrack includes an LCD Soundsystem song, which absolutely blew my mind. That was worth the price of admission.)