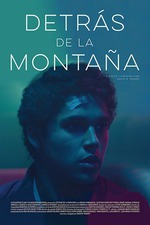 If this festival has convinced me of anything, it's that beneath the waves of the already discovered indie breakouts and international hits, there's so many filmmakers and films that are so aesthetically assured, so confident in their own stylism, that, maybe in some other universe, a film like Beyond the Mountain would be on that Academy stage, or receiving wider festival recognition, or just being talked about to any extent. Even a few days after its initial screening, the film hasn't cracked 200 views on this site. That isn't to say a film like Beyond the Mountain is better than whatever film takes up the Anglocentric mainstream's limited interest in non-English work, but I do consider it comparable to the point that these massive differences in popularity kind of baffles me.

An outlook on culture and character is gathered through this angered, albeit slow and strategic journey of revenge. Distinct urban colors, shrouded and foggy blues, reds, yellows, all adding not only to atmosphere, but to the film's electric sense of intensity. The effect of more artificial lighting versus more natural lighting really has me questioning which scenes will go in which direction, with the most intense and focused use of color feeling more directed toward conclusion, and even the more relaxed scenes feeling insidious and unpredictable. What matters most is that scenes done in both styles, as well as the scenes that fall somewhere in the middle between the two, are all beautifully managed and transition between one another quite snugly. The same goes for its conflict between sensuality and violent intensity, with abrupt shifts always feeling strictly contextual and appropriately jarring.

How light and landscape accommodate tragedy at its burning intensity, to then leave at its loneliest and most unspoken moment.