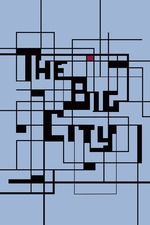 Satyajit Ray is not as appreciated as he should be (full stop, then continue) for his variety. With The Apu Trilogy and The Music Room among others now behind him, The Big City was one of his more modern works to date, and arguably one of his finest in this style. This time taking an aesthetic more reminiscent of the French New Wave or the Direct Cinema scene in Canada at the time. The Big City is certainly one of Ray's more timely works, but not in the sense that it is easily dated or entirely dependent on being in the moment. It depicts its own era, just the same as his previous films depict other eras. Ray doesn't lose himself to the immediacy and the fleeting detail of modernity, instead giving it the same life he gave his other work.

I wouldn't say The Big City is as refined as similar work at the time, both in a technical sense as well as in its storytelling, but individual elements here easily rival the best of either movement. Not every shot or scene is extraordinary, but a whole new layer of emotion is added with his more dynamic or experimental visual ideas. The acting is also very restrained and fitting, with its actors doing a spectacular job meeting the middle between realistic and expressive performances. Even the progression of plot, something I don't so often note in my reviews, inches really closely to feeling too convenient for its final purpose. The morality of The Big City is still made clear, but not through artificially and abruptly shifting the narrative for the sake of that ultimate purpose. Satyajit Ray balances a moral tale with a compelling and realistically flowing one, making such attempts at things like progressiveness more sincere in how they come about. Not by forceful awkward shortcuts, but by more honest and complicated situations.

If there were one film specifically I would compare it to, it would not be a French film, or even a Canadian one. For my own little personal connection, I suggest, all the way from Italy, Ermanno Olmi's Il Posto. It was two years prior and shares some similar workplace/workforce commentary, with that looser early 60's style that international cinema especially caught onto pretty quickly. Though I do think The Big City goes on a more theatrical pace than Il Posto, with more conventional plot structure and character growth. And I wouldn't exactly call either film the finest of their era, though I am aware how many people might disagree with me on that. I still see them both as being fascinating subversive works in their own right, and terrific all the same. Imperfect, but incredibly exciting for their time and even now, albeit to a lesser extent and with weaker returns than some of the other trailblazers of the time, or even Ray's more formal and less flashy films.

That being said, The Big City is not only a great film, it also more fully convinces me of Satyajit Ray's force in variety and in ability. While not perfect with hindsight holding it down somewhat, achieving so much despite its obvious differences from most of his other work prior to it is not only admirable, but incredible. I do think The Big City is a great film, but when held to the standard of the films around it, by Ray and against its peers, I admire it and will go on to remember it more for how it was done so confidently, so effortlessly by Ray, without feeling out of place for even a second. The expressiveness of his past and the grounded restraint of an oncoming era, riding the wave of change like he knows what's coming next.

The Young and the Damned