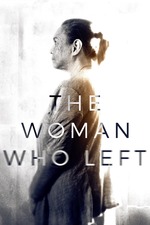 The Woman Who Left

We as filmgoers have this predetermined idea as to what a conventional runtime is, or should be. There isn't any "correct" runtime for telling a story, we just keep around this expectation of what is normal and what isn't. Films that stray from this safe little spot in length are therefore meant to "justify" their length in ways 1h30 or 2h films don't, at least not to the same extent. You could have told The Woman Who Left in an hour. And you should have, because we wouldn't have all this empty space where action should be. To even describe it as "action" feels awfully morbid. Even beyond that, I feel like it is a foolish point.

Runtime creates an effect. And nothing in a film should be seen as anything less than deliberate and pointed. Describing a scene, a character, anything in a film as "pointless" is missing the point that someone else might find in it. What matters isn't the subjective "point". What matters is the effect. The Woman Who Left is nearly four hours long. Okay. Alright. We have accepted that as a part to Lav Diaz's point. Now... what effect does that create?

The effect is that of an afterlife atmosphere. Post-apocalyptic even. Or post-understanding in the way that everything feels distant, cold, and unforgiving. Our protagonist finds herself thirty years behind and wanders the outskirts of society, often depicting both beside and beyond herself in a particularly full way. The shot rolls on whether she is involved or not, really cementing this societal cycle existing beyond just one or two personal narratives. The frigid city feeling stretches far beyond the injustice and the motive of the woman.

Diaz brings further desolation to such a harrowing story with his sharp black-and-white imagery. In textural detail, Diaz may still be the finest visual director working today. Alfonso Cuaron would take on something similar in his recent film "Roma" which reached mainstream success (much more than Diaz might ever receive), but besides Roma's unbelievable sound design, I think Diaz has a better grasp of his technical components and how to use them than Cuaron does. And that is saying a lot for a director who still somewhat wallows in international obscurity.

The Woman Who Left is an unkind force of nature, with the gentle kindness of individual moments making the inevitable return to form all the more painful. I can't imagine it being condensed or shortened besides for the sake of narrative cohesion. I would argue, however, that The Woman Who Left is less about its narrative and more about the process for which such a narrative could exist. The narrative builds everything up, but the things we remember are the gestures, the moments, the images, the meaning. Its size as a film, in its length and in its scale, makes its moments of collapse all the more epic and all the more felt. For something so detailed and so grounded, I remember it all in abstraction. Not in where it goes, but in what it leaves. Cold, empty, and lost.