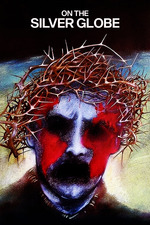 On the Silver Globe

I have little patience for films that masquerade as profound but, in reality, have very little to say. It is unfortunate that I watched this after having so recently seen Stalker for the first time. It was impossible for me to avoid comparing the two. Especially since both were featured on the "Eastern European Apocalypse" page where I viewed this film. Both were the product of tortured production journeys leading to their current forms. While Stalker emerges infused with spirit, meaning, mystery, and magic, this film emerges as an intricate and beautiful, but hollow, shell of a film.

The expertly crafted visuals are driving this film. Unfortunately, the driver left narrative and characterization at the station. This alone is not enough to sink a film. A plot-lite, visually driven film can succeed. Especially those that provide sumptuous morsels of thought-provoking imagery to chew on. But this film just sort of throws food at the viewer and screams "EAT!"

Add to the mixture a ridiculous score, overacting, and an unbelievable amount of philosophizing interspersed with debauchery, and you have a creative and engaging premise, squandered.