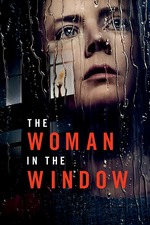 I'm so excited for everyone to find out just how bad this story is!!! Nearly* everything wrong with the movie is because of the book, so this is actually a pretty great adaptation! The novel, by the way, is absolute crap. It takes itself so seriously, it's an extremely frustrating read, none of the characters feel like real people, and it culminates in a reveal that is predictable in the I-wish-I-was-wrong way and laughably stupid and unsatisfying in every way. I went in with really low expectations and was surprised that I ended up having fun with this film!

This does some really nifty things with the camerawork and production design. It really leans into the Hitchcock influence and references, but it does so in a very hammy way instead of self-important (that's how I perceived it anyway, and it allowed me to enjoy this, but I might be alone in feeling this way). In a lot of ways, it works like Gus Van Sant's Psycho remake—you can recreate Hitchcock, but you can never be him.

But TWitW constantly shifts between that hamminess and taking itself too seriously. It would've greatly benefited from totally leaning into a pulpier tone and having more fun with the (very stupid) material. It does at times—it even makes the ending bearable by amping up the trashiness and ridiculousness—but it's not enough. It’s still a mess and it still attempts to be something it isn’t (i.e. an effective thriller that explores human psyche).