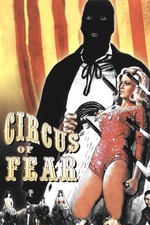 The biggest question about Circus of Fear, is how it manages to be lumped in with a number of German films and categorised as a Krimi.

After all, it has a British director and producer/writer, a British setting and a largely British cast. It is, however, based (very loosely by the sounds of it) on an Edgar Wallace story, which is pretty much de rigueur for Krimi, has Klaus Kinski lurking around in the bushes (ditto) and more importantly, was a co-production with Constantin Films, who also released Rialto Films' German made Wallace adaptations.

I would say that if not for that information you'd never know, but that's not quite true. This is not the sort of film being made in Britain at the time, and certainly not the horror film that the title and a hooded Christopher Lee on the artwork, would imply.

Instead, it is very much in the vein of a Krimi, a hybrid crime/murder mystery, part poliziotteschi, part giallo. It starts off with the robbery of a security van, with the trail of money leading to Barberini's Circus, which is moving into it's winter quarters. Scotland Yard is on the case with Leo Genn leading the investigation, and discovering a series of murders which may involve Kinski, who was lurking around the robbery and is now doing the same here, lion tamer Christopher Lee, who is permanently shrouded in that hood on account of a run in with one of the big cats, and Skip Martin, who is every big as much of a bastard here are he was in The Masque of the Red Death.

Neither of the big names spend much time on screen, instead it's pretty much Genn's show, with the revelation of the murderer's identity not being a huge surprise, because it's always the least suspicious person who ends up being the killer, who is good enough to drop a whole load of information when he's caught.