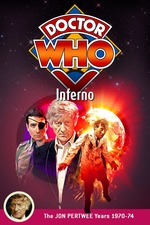 The Classic Doctor Who Rewatch Project

As if the whole notion of a double-hearted, time-travelling alien who bounces around the Universe in his trusty police box, righting wrongs and constantly saving humanity from either being destroyed or from destroying itself, isn’t bizarre enough, things get really odd here as we take on the notion of an infinite number of parallel universes in which every possible action and the consequences of those actions, play out, werewolves (or as good as) and the Doctor taking a trip to the land of Oz.

Professor Stahlman (Olaf Pooley) has got a brilliant theory, if you drill down through the Earth’s crust, you can tap into the boundless energy trapped within the core of the planet. Sounds like a good idea in theory, but things don’t always work out the way you expect them to. While others, like Sir Keith Gold (Christopher Benjamin), who is the eyes and ears of the government, advise a degree of caution, which includes bringing in drilling expert Greg Sutton (Derek Newark) as an advisor, the Professor is determined to steam ahead, ignoring all advice to the contrary, despite that weird bright green ooze which is leaking out, and which has a rather unpleasant effect on anyone who touches it.

In short, it’s a bit like fracking, especially when the earthquakes start, only less dangerous. It’s a case of just because they could, no one stopped to think whether or not they should.

By the time the Doctor arrives on the scene, and immediately becomes as concerned as Sir Keith (nice to see a civil servant as a voice of reason - that’s exactly why some people want to get rid of them), UNIT and Liz are already on the scene investigating disappearances and murders which are definitely something to do with the ooze.

And what that ooze is doing is turning people into werewolves. Not that they’re called werewolves (and the transformation only goes one way), but they do look and act pretty much exactly the way that lycanthropes have been portrayed since even before Lon Chaney got all hairy. Although never mentioned by name on screen, they are referred to in the script as Primords, which tells you a little something about them, but their exact nature is never explored, all we get to learn is that they really, really want to kill everyone and that they are super-heated, with an understandable aversion to fire extinguishers.

This is one of the odder aspects of this story, that they should choose a look for the Primords which is so heavily linked to such a well known creature in horror fiction, and yet which is nothing whatsoever to do with that creature.

But it gets odder still, because two episodes in, just as we’re settling into the story, it all takes a very literal diversion.

The Doctor have been tinkering around with the TARDIS and has removed the central console and had it placed in his lock-up, so he can try to repair whatever the Time Lords have done to it to stop him running round the Universe. So at the end of the second episode, he seems to decide to leave them all to their fate, knicks off back to his shed, fires up the console and disappears.

And when he rematerialises he finds he’s in the same place, but not quite. He hasn’t moved anywhere in space, nor, it seems in time, instead he’s shifted sideways to a version of Earth, or at least of England, where a bunch of fascists have taken over (I’m desperately trying not to draw any kind of parallel with our present situation).

The idea of a parallel, alternate Universe is an interesting one, but it’s not properly explored, all we pretty much know is that they’ve got rid of the Royal Family, so it’s not all bad then, although the Royals do have a history of affinity to extreme right-wing causes, so I’m not convinced that would be the way things would play out. What is clear is that republicans are bad (you’ll note the small ‘r’).

Also, and this is problematic as soon as you start to think about it, every one of the characters we see in this continuum, is present in this alternative one, except the Doctor, and they’re all fully behind the regime, except for Sutton, who is exactly the same in both realities. My point is that despite all the events that have occurred to bring the world to this alternative point, all these people have ended up in the same place. Although if you envisage a reality where an infinite number of outcomes are possible, it’s not quite so beyond the realm of possibility.

I, however, would like to put forward this possibility, that the Doctor didn’t actually go anywhere, because when he reappears he’s unconscious and back in our reality. It was in fact all a dream. I almost expected him to come round, see Liz and the Brigadier and say “And you, and you, and you were there.”

I am completely onboard with the odd turn that the story takes, it’s just a pity that so little about the nature of this alternative Earth is explored. Are we really expected to believe that Britain could really fall into becoming a fascist state? No, wait, I said I wasn't going to go there.

Oh yeah, nearly forgot to mention, the Doctor saves the world, or at least this one, the other really does go to Hell.