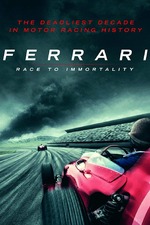 Not so much the story of Ferrari itself or Enzo himself, but of the men who raced for him in the mid to late 50s, in particular, Luigi Musso, Alfonso de Portago, Eugenio Castellotti, Peter Collins and Mike Hawthorn. Most of all the last two.

The film chooses, wisely, not to put the the historians, fellow drivers, wives and girlfriends on screen, except at the very end, instead their reminiscences accompany some truly glorious footage.

Not to spoil anything, but none of those men made it to the 60s, all but Hawthorn died at the wheels of Ferrari's cars, in an era when no one wore seat belts, not because they weren't available, but because if you crashed you had a better chance of survival being throw free of the car rather than being unable to escape the inevitable fireball which would accompany the accident.

The cars look great, but the drivers look even better, sawing at the wheel, sliding through the corners, and best of all Mike Hawthorn wearing his trademark bow tie while driving. That's classy.