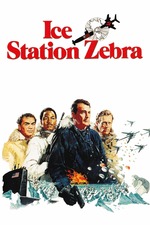 You do feel as if there must have been quite a lot of story left on the pages of Alistair MacLean's source novel, because despite a two and a half hour running time, not a huge amount happens in this story of the Americans and the Russians racing to find a capsule dropped from a satellite, which has landed somewhere in the Arctic.

That sense is perhaps enhanced by the very simple structure of the film, split as it is, into two very distinct halves.

The first half sees Rock Hudson's submarine commander ordered up to the North Pole to try to recover the capsule, or rather the film inside it. Along the way he has to pick up a few hitch-hikers, a platoon of Marines, a spy played by Patrick McGoohan, known only as Mr Jones, Ernest Borgnine's Russian defector, and a hard ass Marine Commander, played by hard ass Jim Brown.

McGoohan and Brown both get to be deeply abrasive, McGoohan in particular is unwilling to allow even Rock in on his business, as far as he's concerned the sub is just a taxi service. Meanwhile, Borgnine is altogether more affable, but since he's a Rooskie we're never going to entirely trust him.

As well as the clash of personalities, there's a bit of attempted sabotage to add to the sense of claustrophobia.

For me this is the most successful half of the film, you really do feel as if you're in that sub with them and that all these guys know exactly what they're doing. The film also benefits from some rather convincing model shots of the submarine, something which is not often easy to pull off.

But it's when we move into the second half, with the arrival on the ice and the hunt for the capsule begins at the burned out wreck of the titular Ice Station, that things become less satisfactory.

You will not for one moment be convinced that the production went anywhere near any actual ice, clearly everything was filmed on a sound stage, the snow is phoney, the ice is phoney and most of all the lighting is completely wrong. I know it gets a bit chilly up north, but filming in something approximating to a real location would have made the world of difference.

This is where the main action occurs, not to mention a big info dump where McGoohan finally fills Rock in on all the details of the mission, and the Americans are joined out on the ice by a bunch of Russian paratroopers.

If not filming in actually snowy conditions wasn't enough of a faux pas, the film commits an even more egregious act, and a quite inexplicable one at that. Having shown us a flight of MiG-21s and another one of F4 Phantoms, which you would assume to be one bunch of Russian, and one bunch of American planes, when the Soviets get hold of the capsule and send it up on a balloon for collection, it's a Phantom that we see coming in to collect it, which means that the two very different types of aircraft we see are mean to be one and the same. It's an error right up there with the use of a helicopter in Where Eagles Dare, also a MacLean adaptation.

Even so, I kind of have a soft spot, although I would dearly love to see the film they originally intended to make, from a Paddy Chayefsky script which was pulled because the U.S. Department of Defense said it was "an unfair distortion of military life", which as we all know is code for truthful.