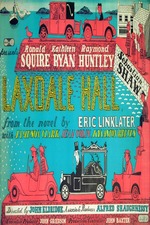 Perched out on a Scottish peninsula, Laxdale is accessible only by a rough track, the village's motorists, all five of them, protest the lack of a proper road by refusing to pay their road fund tax, drawing the attention of parliament, who send a delegation to investigate.

It would be easy to label this as a film very much in the spirit of the Ealing comedies, and in that regard I'm not going to disappoint you, because it's impossible not to think of films like Whiskey Galore, Passport to Pimlico and The Titfield Thunderbolt, and just as pertinently Local Hero, with its small, isolated community, who are fiercely determined to remain independent and every bit as interested in combatting salmon poachers as in getting a road built. It's too easy a comparison, but there you have it.

As well as a very young Fulton Mackay in the role of a civil servant, the delegation includes two M.P.s, played by Raymond Huntley and Sebastian Shaw, neither of whom represent Laxdale's constituency. Huntley's character has been chosen because his mother was a local, but now a millionaire industrialist he seems to treat the expedition as an opportunity to line his own pockets, offering the residents the chance to move lock, stock and barrel to one of his factories, a couple of hundred miles away. Luckily for us parliament is now filled with individuals whose only thought is for public service, and not as a way of enriching themselves.

Little of what follows will come as a surprise, although it is pleasing that the village relies not only on its innate appeal but also on the kind of slightly underhand tactics that would not be out of place in an Ealing yarn.

It's perfectly fine, but be under no illusions, it has nowhere near the charm of any of the films I've mentioned above.

Doctor Who: The Ambassadors of Death