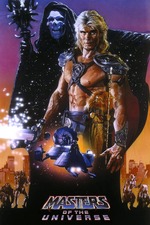 Masters of the Universe

No matter how bad a film it is that I'm watching, no matter how many issues I have with it, it's rare indeed for me to feel aware of the process, but I've never felt that more than I did here, watching Christina Pickles as the Sorceress of Grayskull who has been captured by Skeletor as part of a power grab that will ultimately see him become the Master of the Universe.

All I can see as Pickles is standing there is someone who must be wondering what on Earth she was thinking when she signed up for the role, and suddenly I'm aware that she's standing there in front of all these technicians involved in making the film, all these serious professionals, feeling really embarrassed.

Maybe it's something that actors are able to put to one side, I don't know, maybe they just lay back and think of the money, and crush those feelings that would make any regular person just want to shrivel up and die with just how silly they are looking and sounding.

This is not a good film, nothing about it works at all and the way it's written it never could have.

Moving the story to Earth is a great money-saving idea because it means that they're only required to build one Eternia set as the start and end point for the film. However, that then requires the rest of the action to take place on Main Street USA, with all the fighting and explosions you'd expect, but with the locals somehow being completely unaware of the events taking place in the streets outside their houses. Even James Tolkan's cop, whose own story ends in the most peculiar manner, has to persuade the rest of the force that something's up.

In truth the whole notion of transferring a cartoon to live action is monumentally flawed, there's an obligation to retain the look of all those non-humanoid alien characters, and it doesn't work, most of all the fact that Skeletor doesn't look in the least bit boney.

Ludgren looks the part, he's got the tough tits you'd expect, but no one sounds more all-American than He-Man, and I'm just not getting that from Dolph. Although, just a word to all you young ladies out there, if you see a strange man in his pants, in the street, in the middle of the night, no matter how well-built he is, please exercise some caution. Courtney Cox is a little bit too trusting, remarkably so for someone who wears the most demure bed clothes this side of a Jane Austen adaptation.

Bill Conti is clearly under instructions to do that John Williams thing for the opening and closing theme, but the rest of the time needn't have bothered at all because I don't remember the music at all.

That opening on Eternia had me thinking more of Flash Gordon than the Star Wars feeling I guess they were after, but the rest of the film makes me think they really were trying to take it seriously. Big mistake.

The one thing they did get right is when Skeltor says of Earth is that it is 'primitive and tasteless', which is the most accurate judgement since Douglas Adams had his say.

I imagine some will enjoy the film for it's camp value, but it's not for me, mostly because the action is confined to a Californian town.

The disappointment of the show's fans in 1987 must have been crushing.

Doctor Who: The Ambassadors of Death