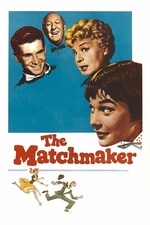 The 2017 I Need A Laugh Comedy Marathon

Screw you Deadpool, this is the Fourth Wall Breakingest Movie of All Time.

The very first and the very last words spoken in the film are addressed to the audience and in between fully six major characters get to tell us what's going on.

Naturally this sort of thing can be an acquired taste, anyone who's seen Miranda or Mrs Brown's Boys will know how fucking annoying it can be. But not here.

Obviously this was remade as Hello Dolly, so how do the two of them stack up against one another?

Well, this doesn't have Babs Streisand belting out a load of tunes, but on the other hand it doesn't have Michael Crawford holding it back. This doesn't have Walter Matthau but it does have Shirley MacLaine sporting a smile which would is enough to make a grown man go weak at the knees.

So all in all it's a win for The Matchmaker.