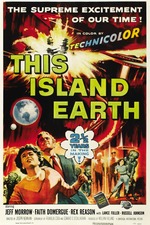 Joe Wilson (Robert Nichols) is clearly in awe of, and probably more than a little in love with, his boss Cal Meacham (Rex Reason). And who wouldn't be? With a name like that, and a jawline to match. He's strong, sexy, handsome and tall, with a deep all-American voice, just a glance their way and the gals must drop their knickers, not to mention Joe. And not only that, but he's a superstar atomic scientist who is on first name terms with everyone, even newspaper men, and Lockheed lend him their jets just so he can save time going back and forth between his lab and Washington. This man is sex on legs and nobody can say no to him.

Given that you do have to wonder why it's taken that group of suspiciously large-domed, white-haired, but not at all suspicious looking gentlemen, to recruit him for their project. After all he's apparently the last person to join the crew of equally brilliant scientists who have, among other things, been charged with the task of coming up with a process to convert lead into uranium.

For a group of people who are supposed to be among the smartest cookies this world has to offer, including Ruth Adams (Faith Domergue), a former conquest - there must be thousands of them - of handsome Cal, who is definitely there because of her brains rather than her looks and who is definitely there to do stuff other than just scream whenever something dramatic happens, although that is mostly her job, they're not all that bright. They haven't spotted what is blindingly obvious to us that these are no ordinary people they're working for, dammit, they're called Exeter (Jeff Morrow) and Brack, good names for the county town of Devon, or a Scottish mountain, but not so much of actual human beings, at least ones who are not trying to draw attention to themselves and to the fact that they aren't humans at all. Yes, that's right, they're aliens.

Look, I'm not going to try and convince you that this is a brilliant piece of thoughtful science fiction, which probes the human psyche while at the same time opens up our minds to the possibilities of the different types of intelligent life which may inhabit the universe. This is not Arrival. This is pulp sci-fi, that's not the totality of 1950s science fiction, but it is what we think of when we think of 1950s sci-fi. It's bright and brash and colourful with aliens and spacecraft and big-brained, claw-handed, insectoid, but bipedal, and yes, bug-eyed monsters. It's out to thrill you and beguile you with visions of unknown worlds and most of all take you on a wild ride.

And it is a wild ride, one moment Cal is about to crash his jet, the next he's being saved by a mysterious and unseen force. Next he and Joe are building a device that's basically an Amazon Echo, but with a death ray (coming soon!), as a test of his ability to follow instructions (insert joke about Ikea), and then he's flying off in a robot aircraft to the secret location to continue his experiments.

But no sooner has he arrived than the experiment is (explosively) abandoned and Cal and Ruth are carried off in a spacecraft, at which point they probably realise Exeter and Brack are not of this Earth.

Then it's off across the galaxy to the planet Metaluna where Cal, if I'm honest, acts like a bit of a jerk towards Exeter, but then no one, not even Cal Meacham, is perfect, and before you know it they're flying back again. Like I said, it's a wild and indeed breathless ride.

Bug-eyed aliens, inter-planetary war and sexy scientists, all crammed into 86 minutes, it really does deliver on its promise where so many of its contemporaries fail.

You may think it's corny, and I would not for one minute argue that point, but it loves along at such a pace that I can't see how you would be bored.