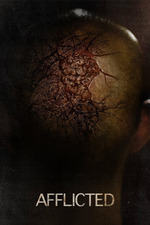 Afflicted is a found footage/mockumentary horror about two Canadians, one with a brain disease that means he could pop his clogs at any point in the near future (Derek) and the other who's video blogging their entire trip to Europe (Clif).

After meeting up with two incredibly hipster friends of theirs (who are in a band, just the two of them, one plays synth and they genuinely utter a sentence along the lines of "not even we're cool in Europe") they attempt to get Derek laid in a hotel in Paris. An encounter with a woman there doesn't quite go as expected, resulting in Derek having an... incident... then he gradually begins turning into something else as Clif attempts to capture it all on video...

Whilst watching it, I thought to myself that it was a lot like Chronicle-meets-REC. I have since discovered that pretty much everyone else who's reviewed Afflicted has also made a near enough identical comparison. Oh well! It is said that it's impossible to have a completely original thought.

It has a likeable enough cast, all things considered, and the way Derek's transformation is captured works really well. There's a few easy jump scares dotted throughout, but it still maintains a modicum of suspense and excitement. For such a low budget indie film shot on shaky-cam, some of the effects and make up are pretty impressive too. Slightly fades after about 50 minutes as it tries to change tack somewhat, but otherwise a pleasant surprise.

It's a Wonderful Life