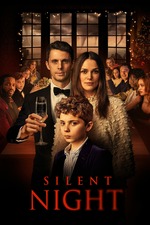 Writer-director Camille Griffin’s debut feature film “Silent Night” effectively blends two seemingly disparate genres — holiday films and impending apocalyptic cinema. Both high-pressure situations that get you thinking about what really matters, Griffin’s film navigates difficult family and friend dynamics with mordant humor as they face the end of the world together on Christmas Eve. While the film works best when it’s satirizing ensemble holiday films a la “Love Actually,” it’s not afraid to go bleak as impending doom creeps ever closer. The tonal shifts are a bit shaky, but her strong cast holds the film together with their chemistry and deft delivery of Griffin’s incisive dialogue.

[Read my full review at The Playlist]

"I don't want to hurt anyone because I know the film is upsetting. I've cried a lot myself through the film, because I care about those characters. They're also very dysfunctional characters, they’re very flawed characters, but I cared about them because they became real. I think we all believe that there should be a slight trigger warning in the film. I don't want the audience to be angry or hurt, which is why it's important that they're not tricked. I’m very grateful there's a slight warning that, you know, it's a dark comedy, and there's death in it." - Camille Griffin