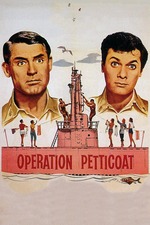 "It's like watching a strip tease. Don't ask how it's done, just enjoy what's coming off."

If you are after a witty, intelligent and sophisticated comedy... well then you are in the wrong place. Made during the fifties obsession with sex and large breasts, the humour will have you rolling your eyes at times as a modern viewer to say the least. But with Blake Edward's on hand the film is handled with a tasteful and good natured heart. That echoed the changing times with it's battle of the sexes and the growing generation gap as played out between Curtis and Grant. A lot of the film is dated, but surprisingly somethings within the film were handled in a modern and feminist manner. Mainly played out with the grumpy woman hating engineer (Arthur O'Connell) whose engine room is put into jeopardy by the head Nurse (Virginia Gregg) whose engineering skills has the couple at first at war with each other. But then sees them bond as shown when O'Connell admits "You're not a woman. You're more than a woman. You're a *mechanic*". Which showed women had more value then what their gender role was typically represented as in that pre and post war period. That they were capable of giving and being so much more and that as a man he actually had more to gain from it. In the end with it's pleasing pace and an excellent cast on hand, this film is a rather enjoyable watch.